Sadly, He Chose To Please The Wrong People... 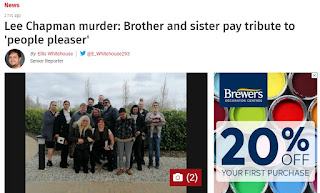 The brother and sister of murdered Lee Chapman have shared how his death “is harder to cope with every day”. Craig Holmes and Abigale Chapman welcomed the life sentence of Tyrel Thompson who stabbed their brother to death in Southend.

“He had the biggest heart anyone could have ever asked for.”

Yes, yes, I'm sure, but why was he stabbed to death?

“He took the wrong turn over the past few years, but he never deserved for it to end like this.”

In her sentencing remarks today, Judge Samantha Leigh told the court Thompson was the second in command of a County Lines drug line called "Max" and would be responsible for keeping drug runners in check.

Mr Chapman had been working for the drugs line as a runner before his death.

I notice there are no comment section on this story, I wonder if the average Southend resident would have described him as having a big heart?

"He had the biggest heart anyone could have wished for".
Overuse of cocaine can cause that, love.
Perhaps if he kept 'people in line' by telling them not to do drugs, he would be alive today. The cynical side of me suggests his family will miss the money and bling he brought in more than anything else..
Penseivat

You lie down with dogs you get up with fleas, it's that simple. I am sorry his family lost a person to murder but serious crime is a dangerous game.

"I notice there are no comment section on this story..."

It's becoming like the 'Guardian', for the very same reason!

"Overuse of cocaine can cause that, love."

The difference being, only one will be serving an appropriate length of time...