It's The Commenters That Do The Reporting Now...

Ian Bryan attacked a 17-year-old boy who was carrying out engineering works next door to his home in St Margaret's Road, St Leonards, on April 22.

The teen and his 32-year-old colleague were staying at the property while they completed the work.

But Bryan believed they should not be there due to coronavirus restrictions, and later attacked the men with knives after reporting them to police.

The 17 year old is lucky to be alive, having been stabbed in the throat.

Police and paramedics rushed to the scene and found Bryan to be in possession of two knives.

The 58-year-old would not co-operate with officers commands and refused to drop the blades.

Eventually he was Tasered and arrested.

And now his trial has concluded. Will justice be soft, as it often is these days?

As a result, he has been jailed for 14 years.

Oh, it seems not. That's strange. Could there be a reason? 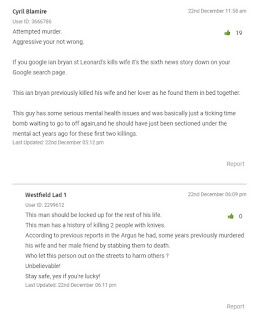 Funny how the 'journalists' don't see fit to inform their (dwindling) readership, eh?