The Rise And Fall Of The Mask Bullies...

Most of the big supermarkets are clamping down (often incorrectly) on groups shopping (tough luck, mum with no relatives to leave the kids with!) and people not wearing their BorisMuzzles.
None have gone quite this far, though: 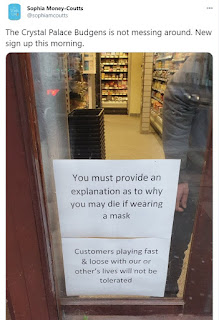 This garnered approval from the usual crop of #CovidKarens:

Who are - as usual - as wrong as they are smugly self-righteous:

A disabled woman assisted by Kester Disability Rights has been paid £7,000 in compensation by a service provider who refused her access to a service because she was unable to wear a face mask. The pay-out was achieved through negotiation as there was no dispute that access had been denied, or that the Claimant had a disability exemption. The only thing to be agreed was the amount of compensation, not whether it was due or not.

Refusing access to people unable to wear face coverings due to disability is direct discimination - no different to denying access to a black or gay person for example.

I hope that Budgens store has had a rethink, or it could prove very costly...

Email ThisBlogThis!Share to TwitterShare to FacebookShare to Pinterest
Labels: CoronaVirusPanic, disabilities, What the hell is wrong with people?

Yup, massive fail on Budgens' part there. The breach of disability discrimination is there for all to see and there's no disputing it because they have cheerfully provided the evidence. Perhaps someone, somewhere, in their organisation should have taken the time to read the legislation. It only takes a moment or two and even an epsilon semi-moron should be able to follow it.

Anyone who is exempt is merely obliged to say "I am exempt." They are under no obligation either legally or morally to provide an explanation as to why.

Divisive and cruel. Evil. We must as the English rise above this nonsense. Peter Soakell. Bournemouth

There must be more to this than we are told in this article. Abuse or insensitivity whilst dealing with the person concerned is the most likely shortcoming on Budgen’s part.

Where individuals are unable to wear a face covering all the shopkeeper is required to do by the Act is to provide a reasonable alternative method of making the service in question available to such disabled persons. For example:-
Online shopping
Click and collect
Personal shopper
Issue of a transparent plastic face shield.

"The breach of disability discrimination is there for all to see and there's no disputing it because they have cheerfully provided the evidence. "

There's lots of evidence that store staff and their hired security goons are continuing. And frankly, until huge, swinging fines start to be levied, they'll keep at it.

"We must as the English rise above this nonsense. "

There's heartening signs that people are begining to treat lockdown with the same contempt as they treat other nonsensical rules. This needs to grow and grow.

"There must be more to this than we are told in this article. "

And not everyone can or wants to shop online, or be treated as a leper with a 'personal shopper' or faceguard. Just, as Longrider says, accept that 'I'm exempt' is the end of the matter.