Hugh Muir is at it again:

The evening rush outside the Vicarage Fields shopping centre in Barking has the skin tones of many of our major cities. A white English woman in a shiny black raincoat hurries to a cash machine. Another woman of Chinese extraction walks by, her neck protected by a fake-fur lining. Two Asian men in jogging gear chat behind her. A black man folds his newspaper and hurries home.

Oh, what a wonderful multicultural Garden of Eden (despite the hideous carbuncle that is Barking Train Station), eh, Hugh? How pleased you must be to see this, in the, ooh, let’s be generous and say three hours, four tops, you might have spent in Barking before fleeing back to the safety of Grauniad HQ.

Did you think to enquire if the ‘white English woman’ was happy with the way Barking has changed? Or didn’t it occur to you?

But it seems there’s a serpent whispering to the inhabitants of Barking, and Hugh cannot let that go without challenge:

Many people from different parts of the world have alighted here in Barking and this week Nick Griffin of the British National party announced that, come the next election, he plans to be their MP.

Which is unlikely, as it’s a Labour stronghold, though admittedly the BNP have done well there in the past.

The far right already forms the official opposition to Labour in Barking and Griffin sees easy pickings from the corpse of an old Labour fiefdom. He might be right. But Darren Rodwell tells me he may have to think again.

Oh, really? And what does Darren Rodwell (who he? We’ll find out) plan to do about it?

For things have been happening on the ground, things that might help Labour make up years of neglect that left estates vulnerable to the appeal of the BNP. It's not based on morality or political philosophy, he tells me. Those aren't the key drivers of opinion. It's practical. It has to be.

So, what’s the magic formula that will turn the Barking voter away from the BNP?

Please tell me it isn't the useless UAF, who decided to support the RMT in a demo against the BNP on Thursday, and all assembled outside Upney Tube Station, with a BBC reporter filming them...while Griffin went to Barking Town Hall!

The response, says Rodwell, born and bred in the area, must also be about the nuts and bolts, reconnecting with erstwhile supporters, showing empathy.

And they plan to do this by resolving the pressing issues with immigration, lack of housing and crime?

That is why this year, Rodwell, 39, a tenants association leader and a Labour agent, has helped Margaret Hodge, his much-maligned MP, and other volunteers, deliver more than 150,000 letters and leaflets. They have knocked on 22,000 doors; made around 9,000 contacts; delivered 20,000 questionnaires. The politics of shoe leather.

And how many of those 9,000 told them they’d happily vote Labour as a result? How many told them something else?

Griffin will inevitably work hard – unlike some of his councillors in the town hall – for he sees the opportunity of a lifetime here. But Rodwell tells me that Labour, having realised where it went so wrong in its heartland, is ready to work harder.

Yeah. It’s ready to…well, spin. And avoid the issues. And send out leaflets.

That’ll do the trick, I’m sure.

And I can’t leave this post without uploading a screengrab of this article this morning, showing that the Grauniad’s reputation for poor editing is still intact: 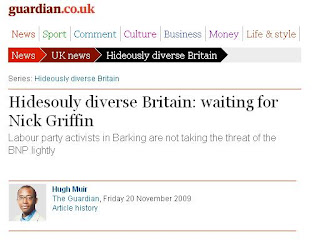 Can't see the BNP winning this one, but what they are doing is forcing Labour to commit resources and time to fighting for its core vote, rather than reaching out to hold its gains in the last elections. I expect marginal seats may well fall to the opposition parties because Labour wont be able to afford to fight for them properly.
The UAF and the RMT might be the BNP's biggest vote winners here, not exactly popular with ordinary people the lot of them.

As far as I can see the BNP is very old Labour- from before any intellectuals joined. Its economic policy is state socialist appealing to a particular part of the people (the same people who Labour were set up to appeal to) and I don't recall multi-culturalism figuring much in Kier Hardie's agenda.
Hence we must either describe the BNP as left wing, describe the Labour Party (at least historically) as right wing, or be wrong.
Whatever we call it, the BNP is designed to appeal to Old Labour core voters- so of course they will impact most there.

Not in the RSS feed they haven't ;)


I read first paragraph and thought "why does he keep reinforcing the people's skin colour differences. Is he obsessed?"

Labour will pour money, and promise to pour even more money, into Barking to try to buy off the voters and prevent Griffin being elected. Can we afford it?

I particularly liked this detail

A woman of Chinese extraction walks by, her neck protected by a fake-fur lining.

I mean, no one who isn't a Caucasian would wear a real fur coat.

...Except if they were in a rap video of course.

What will actually happen is anyone's guess, but the unpopularity of Labour's policies, the recession, the imposition of the Lisbon 'Treaty' etc, have given N. G. the best chance he has ever had.
To avoid extreme embarrassment, Gordon Brown is going to have to pull a very large rabbit from a very small hat...

"Can't see the BNP winning this one, but what they are doing is forcing Labour to commit resources and time to fighting for its core vote..."

"As far as I can see the BNP is very old Labour- from before any intellectuals joined. Its economic policy is state socialist appealing to a particular part of the people..."

Also true! Though that sdoesn't stop it constantly being referred to as a 'right wing' party.

"Not in the RSS feed they haven't"

"I particularly liked this detail.."

If it wasn't cutting off my nose to spite my face, I'd like to see Labour win the next election, and I'd laugh myself silly watching them attempt to deal with the results of their current scorched earth policies.

Wouldn't surprise me if Nick Griffin got in actually. I knew Barking when I lived in that neck of the woods many years ago. Barking consists mainly of ex-Londoners who were driven from their original roots by uncontrolled immigration.

Now it's happening again, I doubt whether many of them are pleased with the "diversity"....

I heard yesterday from my other half that a long term council tenant in Greenwich (white family) applied for a bigger house as their family has expanded quite considerably (they had twins).. the woman at the council offices whispered in his ear "you won't get a 4 bedroomed place you know, they're reserved for the immigrants"..

When people get told that sort of thing, what do we expect? They'll vote BNP!

Hidesouly, brilliant.
Well if each of those 6.8 leaflets and letters per household major on the delights of diversity I would expect them to act in Nick Griffins favour.