Louise Bolotin throws down the gauntlet for the disabled:

The current debate about the routine abuse women get online when voicing their opinions draws attention to a wider culture in which trolls see minorities as fair game.

Disabled people get their share of online hate speech too.

Well, if you were left out, it wouldn’t be very respectful, would it..? Someone would probably have a whinge at that too.

Gervais tapped into today's dark attitude towards disabled people, who are facing unprecedented cuts in benefits yet routinely portrayed in the media as fraudulent, workshy scroungers.

No, disabled people aren’t ‘portrayed in the media as fraudulent, workshy scroungers’.
Fraudulent, workshy scroungers who are claiming disability benefits illegally are thus portrayed; there’s a big difference, but it suits your cause to pretend that there isn't.
And sadly, it does indeed taint the cause and weary those who might otherwise agree with some of the claims made against the current crackdown on benefit fraud to have a continual litany of 'The ConDems are Nazis!' and 'They want to see us all in gas chambers!' ringing in one's ears...

Twice recently I've joined a discussion on Comment is free and mentioned my epilepsy in passing because it's been relevant to the debate. Responses have ranged from "lighten up" and "get over yourself" to "you decided to tell me you had a disability, and I'll do what I want with the information", with the clear implication I should expect abuse.

Well, seriously, what do you expect? We are constantly told that disability shouldn’t matter and that people should be treated equally, and then suddenly, when it suits you, you whip out the Impenetrable Shield of Victimhood to stifle any argument...

Nicola Clark, the mother of two disabled teenagers, called out Gervais on his "mong" comments only to be called "cunt" and "mong" by some of his 650,000 followers.

Showbiz blogger Berry Hogan tweeted: "I really hate @mrsnickyclarke [sic] she searches for people who tweet mong then goes after them for a little publicity. Stupid cow." He then called her a hater of free speech and a "modern-day Mary Whitehouse".

I can’t really disagree with that, frankly. I hold no love at all for Gervais, as like Bucko I find him frankly unfunny, but the Twittermob that sparked up by not just his comment, but his initial refusal to bow down really annoyed me.
And the way Clark has gone out of her way to keep the argument going is, frankly, distasteful. 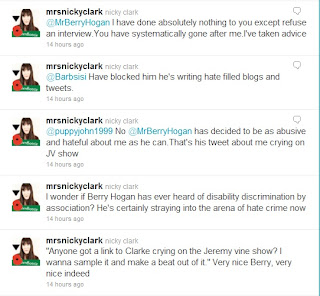 There's something about the searching of Twitter to find something offensive to shout about that makes me immediately dismiss anything that person might later have to say, no matter what...

Clark noted a gender divide in the abuse directed at her. She says: "On Twitter most of the abuse came from men, who also asked why I was hanging out on Twitter instead of being carer to my children. When Gervais was discussed on blogs, though, the abuse I got was mainly from women, who called me humourless and publicity-seeking."

Probably because we’re sick and tired of the ‘professional victim’ tag getting applied to us by default, as a result of just this sort of publicity-courting!

And calling someone ‘humourless and publicity seeking’ is now considered abuse, and beyond the pale, is it?

Franklin and Clark's experiences are typical snapshots of what disabled people or their carers can expect if they speak out online.

No, they are examples of the kind of response those two instances can sometimes trigger, when people can't let go, or want to do it 'for the cause'; 99% of the time, the conversation can be perfectly pleasant and disagreements can be handled without this overkill.

But hey, we can’t possibly pass up a chance to stick an extra card in the Victimhood Poker deck, can we?

Hate speech is illegal in the UK, but while the legislation covers race, sexual orientation and religion, it ignores disability. Perhaps now is the time that all of us on the receiving end of online abuse just for expressing a viewpoint should be working together to get this omission overturned.

Yes, because it’s worked so well, hasn’t it?

No-one is ever now abused on religious, racial or sexual orientation grounds, ever. And it hasn't led to idiots, cretins and attention-seekers causing havoc, has it?
And it absolutely, positively won't lead to further abuses by the State, will it?
Posted by JuliaM at 13:30

I often think we've moved from victimhood poker to victimhood roulette, certainly more options on the gaming table. But the tendency these days to carry a grudge against anyone who offends until it dies of old age and then mount it as a trophy to be admired in passing seems to go beyond the bounds of sanity and clear out to the other side. People often say offensive things and you really have no right not to be offended, but that doesn't mean constantly sniping from the sidelines once the initial angry period is over.

Just curious as to how parents of disabled children cared for at home find the time to trawl the web and twitter all day.

Mine aren't disabled but when they were little and at home full-time I had to make an appointment with myself just to have a pee.

As a retired, white, English, heterosexual, able-bodied and nominally christian male .. I don't have a "victimhood" card to play ..

I believe that I'm being discriminated against .. to whom do I make my formal complaint ?

So she wants to comment in a world-wide free-speech environment, and she hopes that absolutely nobody will be unkind?

Somebody should set some parental control on her access, so she doesn't see or hear anything nasty.

Or maybe she should move to a different planet, inhabited by a completely different, inoffensive species. But would they let her in? She's already upset me. I'm a man, and she said that men are abusive. That hurt me. I'm offended. Traumatised, actually.

It's probably going to be a required core subject in future - Victimhood 101.

"It's probably going to be a required core subject in future - Victimhood 101" ...

Oddly enough James, I was under the impression that it had already been incorporated within the SATS tests .. ;)

'Cos it seems as though only we old buggers aren't fully au-fait with the rules of the "game" ..

"'Cos it seems as though only we old buggers aren't fully au-fait with the rules of the "game" .."

Pshaaw. Buggers, old or otherwise, are at least a Queen in the victimhood poker rules.

And I fart in the direction of your un-naturally forshortened ellipsis.

And if you can't actually be a victim, try being "vulnerable" an adjective that is bandied about without anybody ever explaining what it's supposed to mean.

"But the tendency these days to carry a grudge against anyone who offends until it dies of old age and then mount it as a trophy to be admired in passing seems to go beyond the bounds of sanity and clear out to the other side."

Yup. Some people cannot accept that others have a different viewpoint, let alone one that may be wrong rather than evil...

"Just curious as to how parents of disabled children cared for at home find the time to trawl the web and twitter all day."

"Or maybe she should move to a different planet, inhabited by a completely different, inoffensive species. "

Heh! It's all about control. Control others, and that magic state will come about.

What do you mean, it's never worked before?

"And if you can't actually be a victim, try being "vulnerable"..."

"Disabled people get their share of online hate speech too."

Yes, and? If they didn't they would be going "boo hoo hoo, nobody hates us. We demand equal treatment"

That poor woman....she shouldn't have to suffer all that online hate. It must be like 'mental rape' for her.

I hope long prison sentences are imposed on those responsible. Hurting a woman's feelings is illegal.

I think she is a brave woman, the Emily Pankhurst of her generation. Let her love be a light to this dark world.