On a very hot day in August 1994, my wife told me she was going down to the Derry Rite Aid to pick up a refill on her sinus medicine prescription – this is stuff you can buy over the counter these days, I believe. I’d finished my writing for the day and offered to pick it up for her. She said thanks, but she wanted to get a piece of fish at the supermarket next door anyway; two birds with one stone and all of that. She blew a kiss at me off the palm of her hand and went out. The next time I saw her she was on TV. That’s how you identify the dead here in Derry – no walking down a subterranean corridor with green tiles on the walls and long fluorescent bars overhead, no naked body rolling out of a chilly drawer on casters; you just go into an office marked PRIVATE and look at a TV screen and say yep or nope.

I’m a great fan of Stephen King, and have – so far – read all of his books to date. But I found this particular novel to be one of his best-written, a true ‘old fashioned’ ghost story given a modern twist. 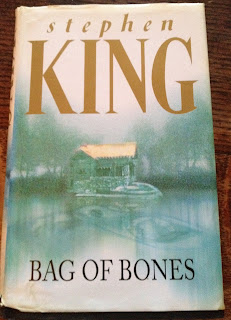 It's a great book to curl up and read on a winter's evening in front of a fire, with an intriguing mystery at the heart of it, and a bone-chilling supernatural revenge motive.

I thought it’d make the best tv/film adaptation too, being almost completely free of any of King's references to his overarching 'mythology' but it was not to be; last year's US tv adaptation attempt was woeful, though it tried hard to capture the essence of the novel.

I hope you've enjoyed this little bit of monthly bibliophilia. There were several books just falling outside my selected twelve, and writing this has actually prompted me to read a few of these again. Chief amongst them Katherine Neville's 'The Eight', a superb dual-timeline novel about a mystical chess set, and Melanie Rawn's 'Dragon Prince' trilogy.

I've not read this particular Stephen King novel so I've downloaded a sample, it sounds good.

I am also going to re-read The Eight it's been many years since I read it and can only dimly recall it. I know I really enjoyed it at the time and bought it for a couple of people as a gift.

TOLL! (GREAT!) This is one that I have not read.

I hope you have sampled Terry Pratchett's Discworld series.

"I am also going to re-read The Eight it's been many years since I read it and can only dimly recall it. I know I really enjoyed it at the time and bought it for a couple of people as a gift."

She did a good 'follow up' novel based on the Magic Circle which is worth a read too.

I've often seen German version on the Kindle site, since their filter doesn't seem to exclude them from search. So you might well be lucky.

"I hope you have sampled Terry Pratchett's Discworld series."

Reaf every one, cover to cover!

The only ones I have only read once, are Pyramids, and moving pictures.

Just could not get into those two, for some reason.