One of my favourite London attractions, when driving (or more likely being driven) through was always this, Jonathan Kenworthy's superb 'The Leopard': 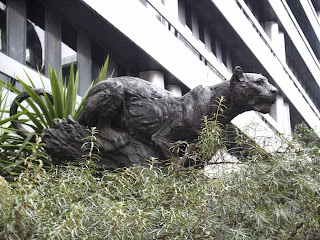 A splendid example of Kenworthy's animal sculpture, a sculptor of whom I've always been an admirer.

Commissioned for Wates, he stood in the heart of the City, and was superbly set amongst tropical plantings in a little square in Friday Street, just by Mansion House Tube Station, which probably (thanks to all the road 'improvements') is now hell to drive, but my father always loved to cut through the city on the way south of the river in those days, so we often passed him.

I took a side-trip once on a day out in London, just to photograph him. Sadly, that was long before digital, so his portrait is probably in the loft somewhere, and not on my PC! This photo appears courtesy of the 'London Daily Photo' website. He was even listed on the 'London Attractions' webpage, and still is, despite no longer being there.

Sadly, in 2009, he was moved to Leatherhead. A virtual trip to the old site via Google Maps showed me nothing I even recognised, so I suppose redevelopment saw his removal. London's loss is truly Leatherhead's gain.

If a business trip ever takes me that way (unlikely in my current job, but still more likely than a leisure trip!), I must spare the time to look him up.
Posted by JuliaM at 13:30

What a great looking cheetah.
-A Daily Mail Journalist

Julia, if you like that sculpture (and so do I) you might also enjoy Mark Coreth's. He has a life-size Lynx stood atop a post that I covet...

Taut feline musculature captured to perfection...I had not heard of this sculptor before today so thank you for this fine example, Julia.

"What a great looking cheetah.
-A Daily Mail Journalist"

"He has a life-size Lynx stood atop a post that I covet..."

"I had not heard of this sculptor before today so thank you for this fine example, Julia."