You'd Think It Was A Ferry Accident, Or A Cruise Liner Run Aground... 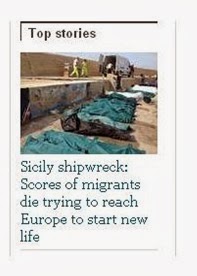 ...and not a boat loaded to the gunwales with illegal immigrants! I mean, did the 'Indy' think if they'd landed, they'd have all lined up at passport control?

Meanwhile, Hugh Muir in the 'Guardian' is scrambling to make this all the fault of the West:


In all the coverage today of the sinking of the migrant boat off the coast of Italy – and with up to 300 dead, there will be a lot of it – one quote needs to stay at the forefront.

"This is not an Italian tragedy, this is a European tragedy," said Italy's interior minister Angelino Alfano as he arrived on the island of Lampedusa.

Actually, isn't it a Somali/Eritrean tragedy? That their countries are such ghastly places their population prefers drowning to staying there?


And what are we doing about this constant and inevitable knocking at the door of Europe?


We confront the problem with an unedifying hotchpotch of neuroses and political spasms that ensure we never truly see it in the round, never discuss it rationally and never get to grips with it.

It's 'neurotic' to not want to be swamped by economic migrants?


The Lampedusa boats were filled with Somalians and Eritreans, and yet right now Somalians in Britain face the loss of the mechanism whereby they were able to help relatives in their home country by sending home millions of pounds in remittances. Barclays is withdrawing from the market for fear of being accused of funding terrorism.

Which, as far as I can see, has absolutely nothing to do with this incident whatsoever, but isn't it nice to see someone in the 'Guardian' demanding less control over banks for a change?
Posted by JuliaM at 10:55

Its not Europe's problem it is Africa's problem, once the idiots in charge (can we get rid of them please) realise that and let Africa sort its own problems out then that is they only way it will happen. If the African Union say can we have assistance then by all means, but primarily it is an African problem.

Why do people want to come to Europe and especially the UK ?

Aren't we all racists, homophobes, Islamaphobes, and child eaters - mostly.

Why would anyone would want to come here and not build a fully integrated and functioning society in their own countries.

Did not some of them want to be rid of our malign rule and strive for freedom and independence.

And as for those people writing signs in 'perfect English'. Are you not safe in France ? Why come to the UK (see above). Oh, I forgot, the French don't take any shit and the French Police have guns.

Send them all back !

"Its not Europe's problem it is Africa's problem..."

"Why do people want to come to Europe and especially the UK ?

Aren't we all racists, homophobes, Islamaphobes, and child eaters - mostly."