...and so the left-wing press has gone into overdrive, marshalling all its useful idiots:


The headteacher of one of the country's top private schools has accused the Daily Mail of setting an appalling example to young people as the paper faces a barrage of fresh criticism from leading figures in education, the church and media over its attack on the late father of Labour leader Ed Miliband.

Oh noes! The Attack of the Leading Figures In Education, the Church and Media! Run away! Run awaaaaaay!

Yes, we've had this ad nauseum for the last few days. It's been done to death, with bloggers of all stripes taking a view - some surprising, some expected, some spot on, about it. And it's not going the way the left-wingers want so far.


"If the Mail speaks for Britain, it is not a Britain I want to be part of," he said.

Referring to the paper's original article on Ralph Miliband eight days ago, which appeared under the headline "The man who hated Britain", he added: "It sets a very bad example to young people to belittle someone who is dead."

Mmmm, does it? Maybe you might want to have a word in the shell-like of the so-called offended party over that one: 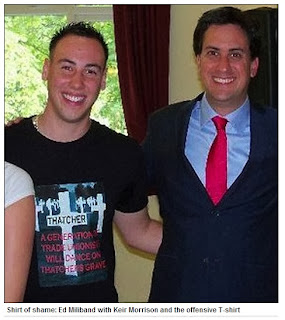 I guess it's OK if they belittle someone who isn't dead at the time, but they just wish she was?

"I think it is nasty, it lacks taste and decency, and I worry about antisemitism."

Do you really? And you an educated man, supposedly?

Did you just not actually read the piece you're happy to criticise in your favourite rag, or are you under the mistaken impression that the thrust of the issue was that Miliband Snr was Jewish, rather than a nasty little Marxist?


"The constant trashing of people for the sake of selling newspapers is demeaning and destructive of trust."

If I Google, will I find a statement from you on the Savile Affair, and all the other fast-crumbling CPS cock-ups it has spawned? I bet I won't...

But the Left digs in and doubles down on the idiocy:


As investigations by this paper show that the Mail and Mail on Sunday are owned by a company controlled via an arcane network of financial vehicles based in two tax havens...

Gosh, so what? It's hardly 'undersea lair inside hollow Pacific Island volcano', is it? Most of us would simply call it 'good business' not to give more money to a government intent on using is as teenage boys would use car keys and whisky...

And after all, if it's up to your usual standards of 'investigations' on tax matters, which usually means 'regurgitating something a bunch if cretins has emailed you without checking', it's probably wrong anyway.


...the bishop of Bradford, the Right Rev Nick Baines, also attacks the Mail for damaging public life. The bishop said: "It is not a matter of taste. It is a matter of the corruption of civic life and the public discourse to do what the Mail did with Miliband."

"The Mail knows exactly what it is doing. I believe it is both corrupt and dangerous," Baines said.

Funny. Some of those 'leading figures in media' didn't seem to have that opinion when they were begging for a job there...

There's an old saying - never go to war with someone who buys ink by the barrel. Whoever it was who originally coined it, they were right. As the left is now finding out.
Posted by JuliaM at 09:05

A headteacher is a teacher who can't even teach.

I seem to remember the leftist media published pieces about Mrs Thatchers dead Father, Alderman Roberts, and his flirtation with the British Union of Fascists.

XX "It sets a very bad example to young people to belittle someone who is dead."XX

"A headteacher is a teacher who can't even teach."

These days, they all seem to think themselves to be CEOs...

"I seem to remember the leftist media published pieces about Mrs Thatchers dead Father, Alderman Roberts, and his flirtation with the British Union of Fascists."

Oh, indeed, it's the hypocrisy I cannot stand.