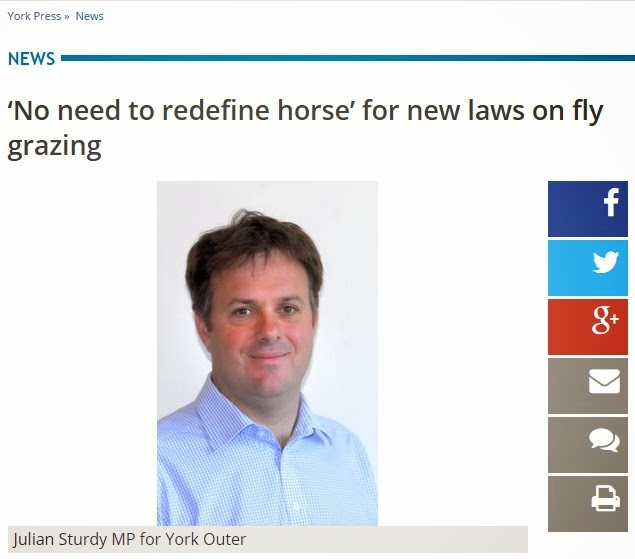 Mr Arbuthnot said: "I just suggest the Bill should, as the Welsh equivalent Bill does, make it clear the word horse includes ponies and jennets."

Liberal Democrat David Heath intervened and said: "I do think the normal definition of a horse would involve anything which was of the same species as a horse, which is to say equus ferus caballus, which ponies and jennets are.

"The reason donkeys are separately identified is because they are not the same species - they are equus africanus asinus if I remember correctly, so they have to defined separately."

Mr Arbuthnot said: "You are almost certainly right. It is quite clear from your intervention that you know far more than I do about these matters - probably most matters."

He added: "If this amendment is unnecessary and we don't need to define what a horse is, as you suggest, then I will move on."

Councils! What would we do without them?
Posted by JuliaM at 10:45

Wouldn't it have been more effective, if when they were putting together the law, they had just used the catch all term "equid"? It could have been accompanied by a few pictures of the variety of "equids" to illustrate to the ignorant.

They state ponies are just small horses. They aren't - ponies and horses, apart from being defined by height at the withers, also have very different long bone proportions.

Well, it would, but I guess such thinking is beyond our 'betters'...