The Long, Long List Of Things ‘Traumatic’ To Special Snowflakes Has An Addition… 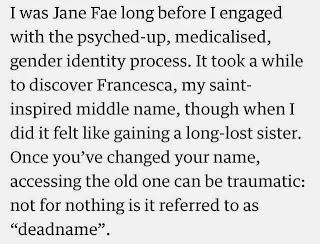 If you’re gobsmacked by that, you ain’t alone! It seems what’s upset the applecart this time is the process of changing your name:


According to the law, you may call yourself whatever you wish: it is not for any organisation to dictate what name or title you may use, unless they suspect you are doing so for fraudulent purposes. However, panicked over money-laundering and terror, the UK government has threatened sanctions against banks and financial institutions, who take refuge in making demands for pointless documentation.

If it’s needed to fend off the increasingly belligerent arms of the state, I fail to see how you can label it ‘pointless’.


Trans people tend to change their name once in their lifetime. Non-binary people, too.


Last year, the cabinet came up with a new system for registering to vote, requiring disclosure of previous name. They were shocked to learn, in the course of meetings with myself and Helen Belcher, secretary of the Parliamentary Forum on Gender Identity, that a significant portion of the trans community would prefer to disenfranchise itself – to not vote at all – than disclose their previous name.

Frankly, if they didn’t yell ‘YES!!!’ and start high-fiving each other, they should be ashamed of themselves – the fewer kooks & single-issue nutcases like Jane Fae who opt out of the electoral system, the better for the rest of us…

Which I suspect means more hoops to jump through for everyone else, and a big fat Victimhood Pass for the transgender identity group…


Yet even when name change is “just” for reasons of marriage or divorce, there can be cost and hassle, as different organisations demand different standards of “proof”. For instance, many banks now reject marriage or divorce certificates if they are more than six months past. The current processes disproportionately drain the time and money of two groups: trans people and women. That, as any equality lawyer will tell you, is prima facie a definition of indirect discrimination.


Name change processes are a constant source of friction. They slow down your ability to live your life and, when the jobsworths get it wrong, are a source of significant upset. Organisations need to find more respectful ways to deal with individuals. Or, like my bank, they’ll find themselves on the end of not just public embarrassment, but court action for unlawful discrimination.

Hopefully one that’ll bankrupt you.

Oh, but wait. It’s never your money you activists take the gamble with, is it?
Posted by JuliaM at 10:30

What the fuck was all that about?

I wonder if it would come out with this shite if it had to make a proper living.

Nothing. It's the march of the self-professed victim again.

"the fewer kooks & single-issue nutcases like Jane Fae who opt out of the electoral system, the better for the rest of us… "

I think you meant "the more kooks [etc] who opt out ... the better". Well, I hope that's what you meant.

I have recently fallen foul of this issue, after leaving my violent ex I changed my name, reverting to my maiden name, so it was not a case of I used to be fred blog and I am now mary jones. But because I was not divorced I could not change my government claim for careers allowance. On my council tax bill the council address me by my maiden name, on the electoral roll is my maiden name, my housing benefit is in my married name. I then get a letter from the council saying I can't have my vote in my maiden name UNLESS i provide reams and reams of evidence most of which I don't have. I have no drivers licence, my out of date passport is in my married name, all utility bills are in my partners name EXCEPT COUNCIL TAX which the self same council send to me. So unless I provide all this crappy evidence they will ban me from voting.So what do I do, the police and women's aid strongly advised me not to go on the electoral roll but if I don't I can be prosecuted and if I revert to my maiden name so I can vote I am also penalised. Despite having explained this to the council MULTIPLE times I still have an issue, still can't provide the required evidence and am still in the same mess. There are people who are not terrorists who can't prove who they are, and to be honest most terrorists and money launderers will have all the requisite ID to perpetuate their fraud. It's the genuine people this effects NOT the criminal classes.

As demonstrated by the writing, with people like "Jane Fae" it not about equality or diversity - it's all about THEM

"I wonder if it would come out with this shite if it had to make a proper living."

"...the police and women's aid strongly advised me not to go on the electoral roll but if I don't I can be prosecuted..."