…especially if you try to force people to get along:


Parents choosing to withdraw their children from a school trip to a mosque over fears they would witness “guns and violence” have been told by governors that any absences will not be approved, amid concerns over damage to community relations.


Mostofa Abdul Rahman, the education secretary of the Cornwall Islamic Community Centre, said that local Muslims had noticed a change in attitudes towards their faith in recent months.

Mosques in Cornwall have been defaced with graffiti and community members have become concerned about the amount of misinformation about Islam circulating among local people.

“There are a lot of wrong ideas about Islam. It’s a much more peaceful religion but it’s being used politically in some areas, and that’s not Islam,” he said.

Ah, right. The ‘no true Scotsman’ defence. That’s not at all unconvincing, is it?


“The parents have to really learn a bit more about Islam themselves, from the right sources, before they make a decision. I have been trying all my life to clear this nonsense up.”

Yes, I remember you standing bravely in front of these misguided Muslims, telling them they are wrong about their religion: 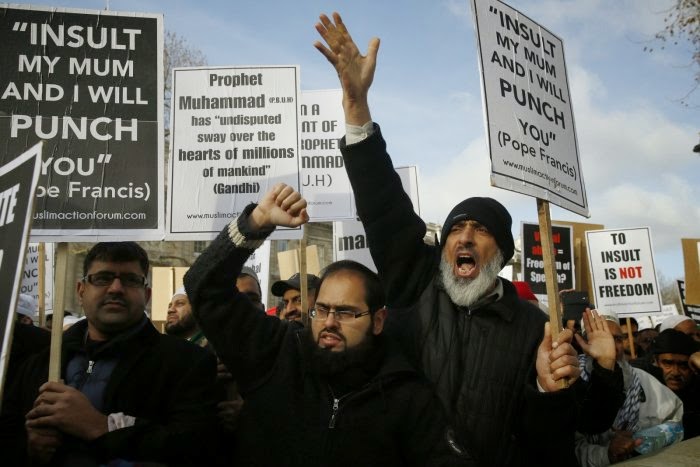 In a statement Kat Smith, the chair of the governors at Lostwithiel school, said: “The visit to the mosque will provide an insight for pupils into the nature of British Islam, help them understand how Islam is presented in the media and that groups like Isis are not a true reflection of the Islam followed by the vast majority of Muslims in Britain.”

Really, Kat? You keep telling yourself that if you think it helps. It's getting kind of wearing, frankly. Because that 'small minority' doesn't seem all that small in other countries either:


The event had been condemned by critics as an attack on Islam, but the organizers insisted they were simply practicing free speech.

Luckily, this was Texas, where they are less keen to abase themselves before thuggery.


Those inside started to sing patriotic songs, including the national anthem and God Bless America, and said a prayer for the injured security guard after one woman pulled out an American flag form her bag.

Over here, she'd probably be arrested for  a public order offence...
Posted by JuliaM at 09:00

The MSM are trying desperately to contain this. The Wail is allowing comments that that say how bad the parents are but my comment regarding the fact that the parents have every reason to be concerned because the local muslims are condoning ISIS through their not condemning them was censored out of existence.

Until such time as the 'so called moderate' muslims start condemning and actively standing against the rot in their midst no one in their right mind can trust any of them.

Even the Army can not force you to enter a place of worship, so what right has a school. The parents have every right to say no.

Any group which fail to recognise freedom of speech, freedom of conscience and equality before the law is a threat to our society. If there were a mosque with a lesbian imam who put law of the land ahead of shariah and where tolerance and good neighbourliness to all were preached, then it might be worth a visit, before coreligionists burned it down.

That Kat Smith is the real danger in our society, we know the Mozzies are mad but shrill millie tants like her are just poison.

Got to love those Texicans though!

I have little to add, Julia. I only wish to thank you for this, and other wonderful posts.

Agreed. My favorite drawings at the Muhammad cartoon festival in Texas, were the two chalk outlines out front.

Just remember that Lostwithiel is one of the original "rotten boroughs". Nothing much seems to have changed.

"Until such time as the 'so called moderate' muslims start condemning and actively standing against the rot in their midst no one in their right mind can trust any of them."

Agreed. It'd help if the MSM stopped giving the oxygen of publicity to the usual suspects, though...

"Any group which fail to recognise freedom of speech, freedom of conscience and equality before the law is a threat to our society."

"I only wish to thank you for this, and other wonderful posts."

Thanks. I'll keep on until I'm silenced!

"My favorite drawings at the Muhammad cartoon festival in Texas, were the two chalk outlines out front."