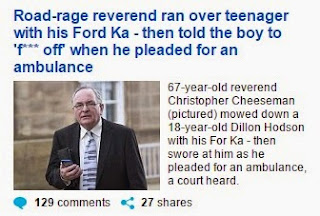 ...vs what the story actually reveals:


Cheeseman, of Burnley, was ordered to pay £150 compensation and fined £135, but cleared of charges of failing to stop, failing to report an accident and failing to comply with a traffic sign.

Chairman of the bench Ronnie Riley said the photos of Mr Hodgson's injuries did not support his claim that he was covered in blood and showed grazing.

He said: 'We find Mr Cheeseman negotiated the junction lawfully.'

So, a more accurate headline would be 'Jaywalker tries it on, isn't believed by court'...
Posted by JuliaM at 09:00

Well they believed something because he was scammed for nearly £300 by our laughable justice system.

I needed a cunning plan for some quick money and then it hit me.

"Well they believed something because he was scammed for nearly £300 by our laughable justice system."

It was the 'failing to stop' bit.