A friend said Mr Aderemi "was just a lovely person that looked after the community".

Hours after the teenager was stabbed, Tony Brady posted on Twitter: "Today I got the news that I lost one of my best friends. I'm sorry you had to go so soon, I'll cherish some great memories. RIPAndre."

In a later post he described Mr Aderemi as "such a nice kid [who] just hung around with the wrong people".

It's always the good who go first, isn't it?


Another former classmate said he had lost touch with Mr Aderemi after secondary school, but said the pair had been friends.

He added: "Andre was a smart and vibrant individual from a young age that simply hung around with the wrong individuals."

Hmm, I wonder what they mea... 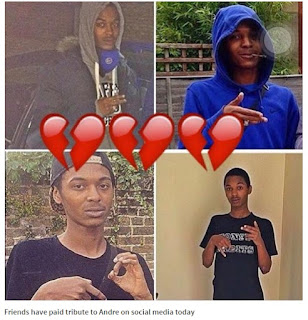 The teenager's sister Sheniqua has set up a GofundMe page to raise money for her Mr Aderemi's funeral.


Mr Andremi's mother, herself a teacher at the Oasis Academy where he studied, said she had moved the family away from the estate.

But her son's attachment to the area and his friends that lived there kept drawing him back – and eventually to his death.

He had to keep that appointment in Samarra, didn't he?

In what appeared to be veiled references to the circumstances of her son's death, his mother said: "Most importantly I want Andre's friend to know I don't blame you, I don't blame any of you.


Referring to her nephew's violent death just hours before, she said: "We don't pretend to understand what went on. Young people, we can't judge any of you, but we just ask that you just stop the warring."

Well, there you go. If you don't start judging them, the rest of us will.
Posted by JuliaM at 09:00

Gang banger dies young, it's a good thing, more of this please.

If every one of them is "...a nice guy who used to hang around with the wrong kind..." then where do "the wrong kind" come from?
Spontaneous self-creation?

"Gang banger dies young, it's a good thing, more of this please."

At least with stabbings, innocent folk rarely get caught in the crossfire.

"If every one of them is "...a nice guy who used to hang around with the wrong kind..." then where do "the wrong kind" come from?"