Quote Of The Month


I found said dreaded wee beastie’s brother (Or sister, with spiders it’s hard to tell. Is there such a profession as ‘Spider sexer’?) in the tumble drier this morning and decided to deploy the heavy artillery, otherwise known as the vacuum cleaner, which is the nuclear option as far as spiders are concerned. Those that learn to keep out of the way of humans live, those that don’t, die. This is the way of things since Mrs Ug first screamed at Mr Ug to get rid of this horrifying half inch nightmare from their cave. You’d think that after the last couple of hundred thousand years of evolution the spiders would get the hint that humans are bad news, but no. Hi-ho. 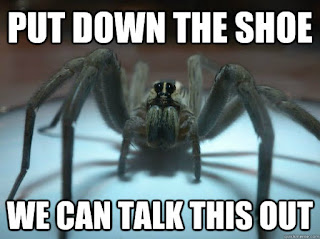 Email ThisBlogThis!Share to TwitterShare to FacebookShare to Pinterest
Labels: quote of the month