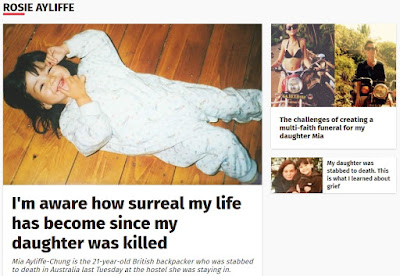 I told everyone the only paper I would speak to was The Independent. (Ironically, being decent and sensitive professionals, they were one of the few who didn't approach me, so eventually I approached them).

After talking about the misrepresentation of Mia’s death in the media as an act of terrorism on the part of an Islamic fundamentalist, the minister delivering the service suggested we include a Koranic reading, and he will find something suitable with a friend who is an Islamic scholar.

...having been raised as a socialist and within the Church, what I choose to take from the scriptures and from socialist texts is that forgiveness and reparation are absolutely key, or violence escalates into something uncontrollable. And the person who killed Mia now has to live with the fact that they destroyed my daughter. If they feel no remorse, then surely they’re a monster in human form, and what kind of life is that?

I know people deal with grief in different ways, but this...?
Posted by JuliaM at 09:00

Religion and socialism not much difference between them. Both have to be taken on faith as neither have any evidence to support their ideologies and dogmas. In fact what evidence there is which is considerable is negative. Both sprang from the minds of people who had little understanding of the world and how it works and which logic, common sense and reason was absent. It is perhaps the curse of the thinking mind that we substitute lack of knowledge by inventing our own however implausible it may be. We fear the unknown so any knowledge true or false will suffice in placating us. We clutch at straws and anyone who offers us those straws we will often do their bidding even if it means doing despicable things. What will many of the adherents of Islam, socialism and progressivism do in their name? From what I can ascertain pretty much anything to further their causes.

In a way I actually admire these people. Sticking to their guns even when it has cost them a lot. Most people talk a good fight but when it comes down to it they are no different to the rest of us, it just hasn't happened to them yet and they think it won't.

"Religion and socialism...." "Both sprang from the minds of people who had little understanding of the world...".
I would suggest they sprang from the minds of people who realised they could amass wealth, position, and power from the weak, gullible, and easily led. Western religions, through Islam, to Scientology have left leaders of these beliefs with all of the above. The Vatican is one of the wealthiest organisations in the world yet is followed by the poorest countries in the world; Mohammed was a murdering, raping, camel thief, destined for an early violent death, until he was "chosen"; L Ron Hubbard was a failed science fiction writer who discovered that if he started a religion, enough gullible people would give him what he wanted. Socialism is exactly the same, from Marx, Lenin and Stalin, Castro and Guevara, Mao Tse Tung, the Jong dynasty of North Korea, to Chávez, as extreme examples, to the Labour and union leaders of modern Britain, who amass wealth and power while ensuring that the rest of the population suffer in the interests of their tunnel visioned political experiment.
Without religion and politics you will still have good people doing good deeds, and evil people doing evil deeds. It takes religion and politics to have good people doing evil deeds.
Penseivat

I like the comment 'it is the way I was brought up', which means he has never questioned his parents beliefs or his own. He has the virtue signalling just about right though.

No, mate. The Vatican is a building, not an organisation. A building cannot be rich. And nobody can ‘follow’ it because it doesn’t move about.

"Religion and socialism not much difference between them. "

Except in the death toll. Hmmm, maybe not even then.

"In a way I actually admire these people. Sticking to their guns even when it has cost them a lot."

I suppose they are at least consistent...

"...which means he has never questioned his parents beliefs or his own. "

Well, once, that was what you went to university for. Now? Not so much.