You Throw That Word Around A Lot...

Mrs Mohammed made continual criticisms of Merseyside Police and their handling of her son after a video emerged of officers and paramedics tending to a dying Mzee, with handcuffs still clasped to his wrists while he lay motionless and unconscious.

The mum said: “I want to ask the Lord to see justice for my son.

“I will not rest, I will walk in my son’s shoes until I get answers, and anyone who had a hand in my boy’s death will be brought to justice.”

...'justice', I mean. As if other people weren't deserving of it too. People being threatened by an out of control youth built like a brick outhouse:


Merseyside Police said they had received reports of a man running into a house in the Toxteth area at around 6pm “in a distressed state.”

Further calls were made to police, they said, about Mzee “behaving erratically at a number of locations throughout the city centre, including Liverpool One with a knife.”

He then suffered a medical episode, a police spokeswoman said.

Two dads have reported that Mzee threatened their 13-year-old daughters at knifepoint while demanding their mobile phones, but the former Shorefields School pupil’s family say they do not believe he was involved in those alleged crimes. 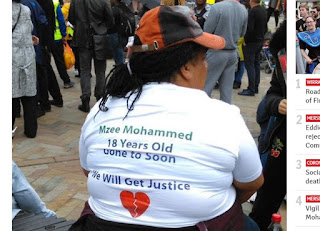 How long will it be before police will not do anything to stop a gun or knife totting person from causing mayhem in case they hurt him/her? Never. Well I am no so sure with the sympathy that every scumbag who is injured or killed elicits it cannot be far off. It is strange that the victims of these criminal acts do not react as vociferously as the sympathisers. Perhaps they do but reporting such is not progressive while sympathisers views are. We are turning the world on it's head we are told to give succour to the undeserving and to disparage everyone else in the name of social justice. As some sort of penance for being better off, behaved and privileged in some way.

It's not so long since I heard a head teacher telling staff that, should they see one pupil - sorry 'learner' - about to hit another, they should stand back and allow the blow to fall because physically restraining or intercepting the aggressor (or even holding their collar or sleeve) could lead to charges of assault. It should, perhaps, be noted that 'learner', in this context, could mean anything up to a 15-stone 18-year-old punching a child of eleven in the face.

Since then, the Government has stepped in and authorised the use of reasonable force to prevent injury to the victim; the fact they needed to clarify this with a public announcement gives an indication of how widespread the 'hands-off' approach had become in schools; given the apparent inviolability of their personal space at school, it is, perhaps, likely that violent young people could suffer an extreme reaction when, for the first time since babyhood, they find themselves subject to physical restraint to protect others.

Isn't Soon a district in Singapore?

That's been the norm for a long time. It could mean an 18 year old thumping a three year old let alone an eleven year old.

You have to prove, after the event, with the benefit of hindsight that you used minimum force.

This is impossible. You could shout "stop" immediately before the blow is landed and the 18 year old *might* have stopped, so you cannot prove that you had no option but to physically intervene.

TBH, sometimes you don't use minimum force anyway. There's two reasons for this ; firstly, you might have a second or two to decide what to do - is this a real hit or just squaring up - these things often happen very fast out of nowhere, so the decision has to be partly instinctive/intuitive anyway, and secondly because anyone involved in restraint knows or should know if you restrain "gently" the likelihood is someone will get hurt. You actually should restrain not with minimum force, or even reasonable force, but the necessary force required to immobilise without issue.

No sane person takes any notice of the "reasonable force" for the same reason, because reasonable force is determined in the same matter. It is very easy to suggest alternative approaches etc. with the benefit of hindsight when you have all the time in the world to think about it.

Expect before too long people to be prosecuted for not intervening when someone gets beaten to a pulp.

The general public do not, as a rule, like seeing police go 'hands on' with people and with everyone now wanting to film any interaction with the police and papers like the Daily Mail all over any transgression (real or imagined) it is no wonder that police are becoming more risk averse and considering very carefully whether it is worth the very real risk to their liberty and livelihood should someone get injured as a result of their actions.
I have had to restrain quite a few people. It is not pretty and it needs to be recognised that manual restraint is incredibly risky for all concerned, yet other options are decried as somehow being 'not British', that is why that when we could we would operate on the basis of one officer per limb and one to communicate (if possible). The reality is usually a messy struggle and nothing like the choreographed fights of TV.
The last line from Paul Robson is correct, there is a piece of legislation going through that can mean a police officer can be prosecuted if they 'misuse their powers or do not use their powers', looks the IPCC can get you either way so you are damned if you do and damned if you don't.
A bit off topic but when a commentator like Charles Moore ( no friend of the police) writing in today's Telegraph with regard to the Orgreave inquiry and the PM says 'No government can do its job without a competent police force and no police force can be respected by the public if it is constantly under attack....She is going to need them, yet she picks fights with them and never thanks them. I do hope she is not starting as she means to go on'. I wonder if the scales are now falling from peoples eyes? May goes on about police reform, she was Home Sec for 5 years and achieved little of note. As I say to people 'you reap what you sow'.
Retired

"How long will it be before police will not do anything to stop a gun or knife totting person from causing mayhem in case they hurt him/her?"

Haven't they already? Remember the London riots, and the 'softly, softly' approach that meant people's homers & livelihoods were burnt by the mob?

"... it is, perhaps, likely that violent young people could suffer an extreme reaction when, for the first time since babyhood, they find themselves subject to physical restraint to protect others."

I often wonder what these youths will do should they find themselves in a foreign country, expecting UK style policing. The thought warms the cockles.

"Isn't Soon a district in Singapore?"

"You have to prove, after the event, with the benefit of hindsight that you used minimum force.

'The only way to win, is not to play the game.'

"Expect before too long people to be prosecuted for not intervening when someone gets beaten to a pulp."

A continental-style 'Good Samaritan' law might run into stiff opposition.

"The general public do not, as a rule, like seeing police go 'hands on' with people..."

Don't confuse 'drunken idiots at chucking out time' with 'the general public'. Why do you think shows like 'Police Interceptors' are so popular?

"May goes on about police reform, she was Home Sec for 5 years and achieved little of note. "

Good point. WE'll have to hope she makes a better PM.

I'm not confusing drunken idiots at chucking out time with the general public. Go hands on with a drunken/violent/aggressive yob in a middle class area and outraged of middle England will be on the phone to complain or the Daily Mail will come up with a 'chilling' video purporting to show an 'out of control cop'. The entitled middle class are every bit as bad as a whinging chav.
I've said it before - you get the police you want and for many police officers it is not worth using force or being proactive, it only brings you grief.
As regards May, it seems the knives are out for her already. I still believe that all May cares about is May. I think Cameron left her at the HO hoping she would make a mistake but she was lucky and he wasn't. If it wasn't for the fact that Labour have self destructed she could have a hard time. I'm betting there will be even more in fighting soon. I am no socialist, as someone who remembers the 70's I am no fan of the unions and the hard left but checks and balances are essential. We need a credible opposition, o matter who is in power. We haven't got and we won't have one for a long time.
Retired