Nice Of The Litterbugs To Identify Themselves..

The displays are part of a joint exhibition, titled Another Crossing, by photojournalist Giovanna Del Sarto and artist Bern O’Donoghue.

Well, the council litter patroils will know who to blame, then!


As well as photos of newly-arrived refugees, the exhibition features paper boats handmade by Mrs O’Donoghue.

Facts about the refugee crisis are written on the paper boats, such as ‘one in four refugees is a Syrian’ and ‘developing countries host 86 per cent of the world’s refugees’.

So far, 8,000 paper boats have been translated into seven languages and spread around the world.

They'll stick out nicely amongst the anonymously-dropped Coke cans and empty kebab wrappers!

The commenters are in similar mood: 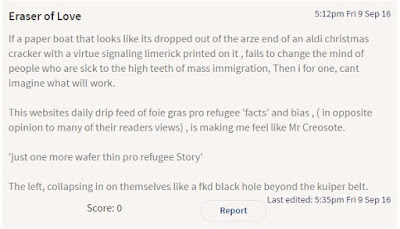 Julia, Are you a "Going-Postal" girl?

‘developing countries host 86 per cent of the world’s refugees’. they forgot the end of the sentence 'all wanting to get to the UK'.

Well spotted Julia. That is a beautiful comment. Thank you.

"...they forgot the end of the sentence 'all wanting to get to the UK'."

It is, isn't it? And escaped the moderator's touch.