On The Fourth Day Of Brexit, The Metro 'Letters' Page Gave To Me… 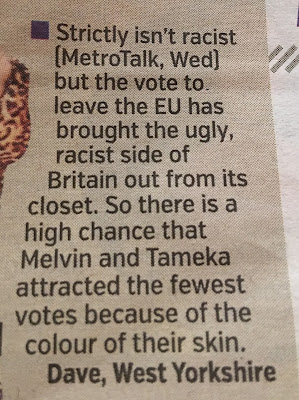 The arrogance, it burns. Dave from Yorkshire is clearly psychic! That or he's just another virtue signalling lefty wanker.

What actually defines a person as a racist? I know the dictionary definition. So by that measure very few of us are because we do not feel superior to people of other races. Anymore than we do to people of our own race except on specific issues. I for instance feel superior to a white person who has left leaning political sympathies. However I accept that my right leaning political sympathise are open to question and the other person will in all probability be superior to me in some other way. Like playing a musical instrument or painting both of which I am totally crap at the list is not exhaustive. Racism is not about questioning a persons attributes and having ones own questioned. That is about opening dialogue and understanding so that we can live in harmony or agree to go our separate ways and live with those who share our culture and social mores. Progressives do not see that distinction as they do not go in for being questioned or debate and do not understand that harmony cannot be attained by force.

Shallow thinking such as this means that white people can never win anything when in competition with a black / brown / insert colour people. I guess the author will vote from the darkest contestants regardless of dancing performance.

As I understand it there were fifteen couples to begin with. Three of these couples had one black contestant. These have now been whittled down to the three couples who are taking part in the final on Saturday. Of these three couples, two of the pairs contain one black contestant. How anyone can find evidence of racism here is beyond me. Unless of course they are determined to see it when it isn't there.

Metro staffers have to wear so many hats it's a wonder they can remember who they really are...

"What actually defines a person as a racist? I know the dictionary definition. So by that measure very few of us are because we do not feel superior to people of other races."

Hmm, that's a criteria tested every day when I read the papers...

"How anyone can find evidence of racism here is beyond me."