The foster family caring for Rocky - which previously mauled another dog to death - reported that the three-year-old Staffordshire Bull Terrier had tried to attack young children, their niece and nephew.

It was one of two separate attacks.

Though he was muzzled, he had tried to bite one of the children’s necks, jabbing with his paws and growling loudly. It forced the family to call the wardens to take him away and he was put down the following day after extensive discussions with various authorities last month.


But a new petition which claimed the wardens acted “illegally”, started by the charity Staffie and Stray Rescue which was responsible for housing Rocky, has seen a lot of calls for the wardens to be sacked and even charged with murder.

Others threatened the wardens and their families, arguing they should be “euthanised” and “ashamed of themselves”.


Calli Byrne, the charity’s founder, apologised for the unwanted attention the petition had attracted.“We wanted to speak to the council but we do not condone any abuse towards people doing their jobs. That was not our intention. We just wanted to let people know about what happened to Rocky. A lot of people loved Rocky, some who never had any issue with him at all. It was a real shock for us. My argument is still that something should have happened before he was euthanised. It’s something we would not consider unless there was no other option.”

There was no other option. There!

Go protest outside your local halal butcher instead, where you might do some actual good. But expecting logic from these people is clearly an exercise in futility: 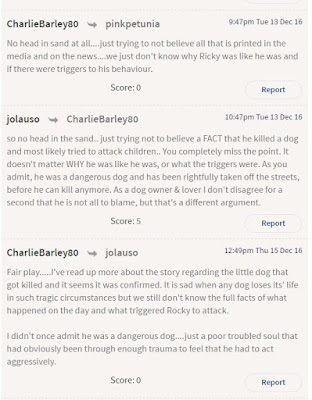 Email ThisBlogThis!Share to TwitterShare to FacebookShare to Pinterest
Labels: animal rights cretins, dangerous dogs, What the hell is wrong with people?

We're just fortunate that the dog didn't nick a car and fatally drive it into a tree whilst being pursued by the police. Imagine the outcry...

At least the dog's pictures - if nicked from social media - would show it to be a happy tail-wagging soul, not a sullen 'hard man'... ;)