On The Seventh Day Of Brexit, The Metro 'Letters' Page Gave To Me… 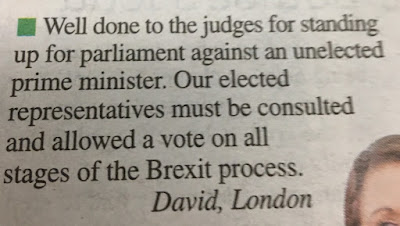 Two things would benefit the world tremendously. One if people engaged brain before opening mouth or doing anything else if that mattered. Two consider if their opinion, belief whatever was based on evidence and not just subjective reasoning. On reflection on the first one if they did it is debatable if that would make much difference to the outcome. On the second one not many could actually understand the difference between the two. So the benefit I seek is a forlorn hope.

How can someone be so ignorant? May was elected by her constituency. Her position as PM depends on her support in the Commons.

I guess the parliamentary vote over triggering Article 50, that was won by a big majority and has made the forthcoming decision from the Supreme Court (is that like Supreme Dalek?) therefore redundant before it is announced, has passed this twit by.

"On reflection on the first one if they did it is debatable if that would make much difference to the outcome."

"How can someone be so ignorant? "

It's not as rare a gift as we'd like to think!

I suspect a lot of things do...