They Don't Sound 'Brilliant' To Me...

Kids Kingdom, in Garon Park, off Eastern Avenue, Southend, is currently holding a week of free events for children who have got 100 per cent attendance at local schools. An altercation between a group of passing youths and parents broke out on Tuesday night.

A man, aged in his fifties, was assaulted during the incident. Thankfully he was not injured. Eyewitnesses told how one of the gang members had a machete hidden in his trouser leg.

Which must have made walking a bit difficult....


The parent said: “We were queuing up to get in when this group of five or six youths attacked this man.

“Apparently they had sworn at him and he had asked what they were doing.

“They were just out looking for a fight.

“Kids Kingdom were amazing and the police were brilliant.

“We were all bundled into the reception area and they barricaded the door.”

Why were the police 'brilliant'..? What did they do?

They certainly don't seem to have arrested anyone!

What are you able to confirm? How about the identities of the attackers? But no, we'll have to go to the local news for that.

No, silly! Not the actual report, the comments, where the real picture emerges! 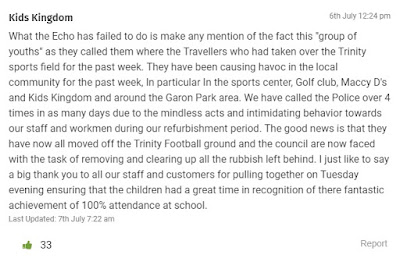 Essex Police's strange reluctance to act is now thrown into sharp focus.
Posted by JuliaM at 10:30

They never will act Julia, a combination of fear and PC from above stops them, been like this for decades.

"What are Essex police able to confirm?" If they have any talents, perception and differentiation do not figure among them, JuliaM. As a prime example, FOI requests revealed that Essex plod filled up with the wrong fuel 332 times in the last few years, costing council tax payers £62,000. The problem is 'there' inability to distinguish between black fuel pipes marked 'DIESEL' and green fuel pipes marked 'PETROL'. This ineptness is exacerbated by visual indifference to a prominent 'DIESEL' label, attached to each fuel cap on Essex plodmobiles.

The upper echelons of the police farce are infested with Common Purpose graduates. They're not paid to think...

After the first sentance I thought this was going in a totally different direction.
I thought it was going to be about a parent who was outraged their kid could not go to the event because they only had 50% attendance and it's not little Kyles fault he has a sickly disposition. Not fair! Wail!

My wife's car is a petrol and my car is a diesel, I drive her car from time to time and sometimes fill it with fuel. Neither of us has ever put the wrong fuel in our car. Why do some people find that avoiding doing so is so difficult? As MTG says, the hoses on the pumps are different colours and clearly labelled.

Of course the police putting the wrong fuel in "there" cars is what this post is about. Oh no it isn't but MTG is such a repetitive cock he can't see that. He's obviously been sitting on this nugget of information until he could use it.

I've no idea what really happened at this incident as I wasn't there and I don't work for Essex police. But just to reassure you bloggers out there-an anonymous post does not count as evidence that the police can use. How would you feel if you got arrested on the strength of that?. I can imagine the outrage from all you armchair experts.
Jaded.

Jaded, I'm confused ('nothing new there', I hear you cry). The Spokesperson for the policeman could confirm that the group were carrying a weapon, but was unable to confirm what that weapon was? Am I missing something blindingly obvious (like 'for legal reasons' they are unable to confirm) ?

If the children are under a certain age the Police, and other authorities, are not allowed to give out details to avoid accusations of criminalizing the young. However, if these kids really were travellers children, then they would have been criminalized by their own parents from an early age. "You do what you want to do. We hold the rest of society in complete contempt. If we are reported for an offence, we simply move to another (unlawful) site and change our name. If we are arrested, then once we are released on bail, we move to another (unlawful) site, change our name and steal another car or caravan to avoid detection. If you, my children, are ever caught by the Police, then claim you are under 14 years of age - the whiskers and moustache are a hereditary trait of maturing early - and they can't question you without a solicitor and appropriate adult. Also, the cretins in the court of human rights have classed us as a separate society, so claim racism. In short, my son, you do what you want, and f*ck the rest of them, because they can't, or won't do anything about it."
That was an introduction to traveller society and laws.
Penseivat

You and your progeny should spend more time in America, Jaded. President Trump adores the poorly 'educatid'.

"They never will act Julia, a combination of fear and PC from above stops them, been like this for decades."

Well, certainly our PM never did anything to reverse that trend when she was in a position to...

"As a prime example, FOI requests revealed that Essex plod filled up with the wrong fuel 332 times in the last few years, costing council tax payers £62,000."

My fear when I switched from petrol to diesel. I never have, yet.

"After the first sentance I thought this was going in a totally different direction. "

"But just to reassure you bloggers out there-an anonymous post does not count as evidence that the police can use. "

Except when someone's writing one about being nasty to a minority?

"Am I missing something blindingly obvious (like 'for legal reasons' they are unable to confirm) ?"

Well, quite! Or maybe the cops are just blind? Got to have those diversity quotas filled!

"However, if these kids really were travellers children, then they would have been criminalized by their own parents from an early age."

And shouldn't that be a crime in itself?