I Wonder If Emily Wished She Hadn't Gone To Journalism School When She Got This One?

Boy, is this one going to be hard to excuse. But his brief is game!


Ed Fish, defending McTighe, of Bristol Road, Brighton, said that “one thing had simply led to another”.

He said the former carpenter had been suffering from an undiagnosed medical condition causing pins and needles and numbness in his limbs.

He added: “He went shopping with his wife in Asda.

“She went into the shop and he was in the car looking after the dog.

“While there his leg went numb.

“He’s tried to get the circulation back in his leg and it moved on to something else.”


Mr Fish said that McTighe had struggled to work because of his health problems and now worked in music production.

He told the court his main income was from tax credits.

So he's a taxpayer-funded wanker...

The comments, as you might expect, are comedy gold! 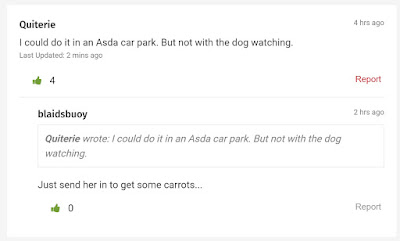 There is, of course, only one possible soundtrack for this story...

'When his tones caress and soften,
When he says, "D'you come here often?"
He is talking to himself.'

Rumour has it that WC Jaded came across a Master Baker in a car park, but here's hoping she spares us the details.

If I'd been his brief the Witness questioning would have gone like this:

"Pc McGarry number 452, You observed the accused, sitting in his car, with his trousers open ,frantically masturbating-or so it seemed- and you didn't consider that this might not be a highly unlikely act of perversion but rather a life threatening bout of chemically induced Priapism that should have had you radioing for a paramedic team? You just assumed my client was merely satisfying some sordid desire when infact he was doing the only thing he could under the circumstances to save his own life? Surely you must be aware that since the general release *waits for the courtroom *snorking* to subside* of Viagra type medications that such spontaneous cases of priapism have become rather frequent?"

This made Oi larf. Not very often I get to do that....

When you write this rubbish Melvin do you ever read it back to yourself before you post it?
Jaded

'When you write this rubbish Melvin do you ever read it back to yourself before you post it?'

Just a 'lightening' check for grammar, spelling and punctuation errors, Jaded. but i was not educatid like wot you was was

"There is, of course, only one possible soundtrack for this story..."

Oh, indeed! I saw her live in London once - she was a really great talent.