Maybe It's Not The Road That's Dangerous....

...rather, it's the actions of the pedestrians?


People living near to the A259 Brighton Road in Shoreham are calling for a safer crossing to be installed on the busy road.

It comes after a 15-year-old Spanish language student was hit by a lorry on the road between the and the High Street.

We already know that it doesn't matter where you put a crossing. You could put one every 100 yards and if people felt like it, they'd cross between two of them just to save a 45 yard walk...


Joanne Parsons, 55, of Ormonde Way, who started the petition, said: “The response to the petition has been really good.

“Another foreign student got hit at the same place before.

“The traffic island is narrow, if you’re in a group or taking your dog to Adur Recreation Ground it is very dangerous.” 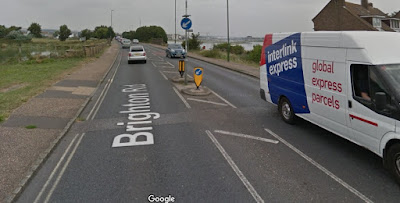 Visibility looks pretty good to me.
Posted by JuliaM at 10:30

Foreign students come from countries that drive on the right. So when they check the traffic on any UK road, they look the wrong way. We British do the same in any European country. That might account for these people being run over.

45 yards... you're being ludicrously optimistic there, aren't you!? Around my way the natives will walk into the road less than 10 yards from the pelican crossing :(

In norfolk any pelican, cross dressing or not, that stood by the side of a road would soon regret it. The locals are always on the look out for something 'exotic'...and not to cook..

15-year-old
That's the clue, the mystery's solution.
"Gotta catch them all".

A major University near me has a lot of Chinese and Korean students. They're very pleasant and no doubt very intelligent but they have ZERO road sense. It's frightening. There's a busy road goes past the shopping centre near the campus and the locals have become very wary when using it.

Sadly a young Chinese woman was killed there some months back, the driver said she simply didn't look, and he apparently checked out OK for speeding and drink driving, so can only assume he was telling the truth.

"...the busy road" doesn't look busy either more like average.

If we built many more wider roads traffic would be dispersed more.

AMEN! The looks we get when crossing the road with Granddaughter (2years) and chanting 'looking left-right'. Then they spot her reins and the looks of surprise turn to looks of concern at our abusing a small child's Human Rights so cruelly.

...I could check , I still have my copy of the The Tufty Club book somewhere, doesn't naughty Willy Weasel get caught running across the road and is then spanked by PC Badger?

That's a pretty good point, I'd forgotten that.

"Around my way the natives will walk into the road less than 10 yards from the pelican crossing :("

Having just seen one do it only yesterday, I think you're right!

"That's the clue, the mystery's solution.
"Gotta catch them all"."

If she's spotted a Kangaskan, I suppose it's understandable... ;)

I suppose the establishment would think it 'racist' to warn them?

Oh my, congratulations! I though parents had forgotten these lifesavers entirely!