They Don't Always Help Themselves, Do They? 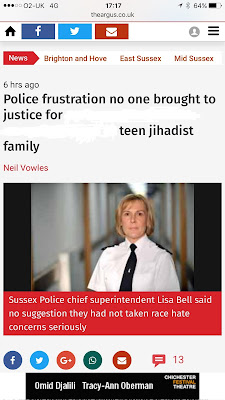 Totally understandable and anyone would....


Brighton and Hove's top cop said it was “horrendous” for the family but the fact that Sussex Police gave such a substantial response over a prolonged length of time was testament to how seriously they took tackling hate crime.

Hang on! 'Hate crime'? Say, isn't there something a little bit off about that headline? 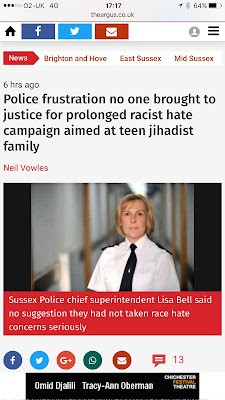 
Mrs Bell said the investigations were plagued by evidential difficulties including accounts from members of the Deghayes family differing “from time to time” and the encouragement by father Abubaker to his children to exaggerate incidents.

Then what the hell do you think you need to apologise for?


The Brighton and Hove city commander said the question of how the teens were radicalised remained the most frustrating aspect of the investigation. She said the force understood the role social media played in brainwashing young people and said it was vital the authorities got to grips with the issue.

She said the force was “very proactive” in not criminalising young people but added it was important for the force to learn that “some criminal, risky behaviour” are indicators of early trauma or vulnerabilities.

This is a cop speaking, right? Not some wishy-washy social work graduate?

Oh, wait. I forgot. That's the sort of cop who makes it to the top these days, isn't it?


Pinaki Ghoshal, director for families, children and learning, said a decision to remove the five Deghayes children from a protection plan in 2012 was not about resources but because of a lack of understanding of adolescent neglect where they were viewed as “perpetrators of violence” and not as victims.

The cops & the social workers seem interchangeable, don't they? So why are we paying twice for the same service?
Posted by JuliaM at 11:00

"So why are we paying twice for the same service?"

Because taxpayers are sheep...but your question implies that Messrs Plod and Jobsworth provide something taxpayers need.

There is a tribe in Papua New Guinea that has a rather unusual, but very successful, way of preventing any form of crime within that tribe. They operate a 'payback' system whereby an offender will not be punished, but rather a member of that person's family will take the punishment instead. Assault someone and a family member, brother, sister, mother, son, will be assaulted in a similar manner and told why. Rape a female and a female family member is raped, and told why and so on. There is therefore a huge incentive to behave yourself.
Whether this is morally acceptable is subject to discussion, but if the Newcastle or Rotherham Muslims knew that their daughters, wives and mothers would be passed around as sex slaves as a result of their actions, it may have caused them to keep their 14th century habits to themselves.
Suicide bombers, in fact, the whole Muslim community, would know that the same number of Muslims, whether family, friends or just members of their community,would be killed in return for an atrocity, may concentrate their hate filled minds somewhat.
You may say that a civilised society should not act this way, but who is to say that we are civilised? For every Shakespeare there are thousands of trolls; for every great artist there are thousands of graffiti vandals and for every charitable person there are thousands of thieves, rapists and muggers, and it's getting worse. Following the Frankfurt School of Thought in making the criminals the victims, and vice versa, hadn't worked, no matter how much the snowflakes and SJWs claim otherwise. Perhaps it's time to go back to a proper legal system or follow the method of that PNG tribe?
Penseivat

This is that Common Purpose crap again, innit? And they wonder why morale is low in the police these days. Not just the cuts having consequences...

"So why are we paying twice for the same service?"

Or, more appropriately, "So why are we paying twice for the same disservice?"

No one would have said that the telephone or the postal system radicalised anyone. It's people using the social network who radicalize someone. No doubt this obvious truth is avoided in order to deflect anyone from examining what kind of person does the radicalizing - their religious beliefs for example.

@Anon there is more wisdom in your comment than is allowed on the internets, sorry. You need to rewrite it.

"Because taxpayers are sheep...but your question implies that Messrs Plod and Jobsworth provide something taxpayers need."

They are supposed to...

"Whether this is morally acceptable is subject to discussion..."

Well, no. Not really. Consequences must fall on perpetrators, not innocents!

"This is that Common Purpose crap again, innit?"

"No one would have said that the telephone or the postal system radicalised anyone."

I suspect the likes of Lisa Bell would, if she thought she could get away with it...