The Mysterious Case Of The 'Troublemakers' In The Seaside Town...

A seaside town reportedly went into "lockdown" on Saturday night as disorder forced pubs and bars in the resort to shut.

Venues in Cromer, Norfolk, closed for the "safety of customers and staff". Some remained closed on Sunday. 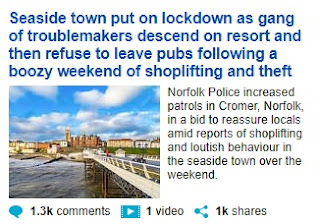 So is it football hooligans? Car cruisers? Mods & Rockers?


The wife of the owner of the Masala Twist restaurant said she was pinned behind a door by six women shouting abuse as she screamed that they were breaking her arm on Saturday night.

Aryun Nessa said she and her husband, together with their young daughter and nephew, had been trying to get up to 40 people to leave their restaurant after they started shouting and stealing bottles of beer.

"The door was shut on my arm - I am quite badly bruised and it's very painful," she said.

"It's a lovely town - calm, quiet, with lovely people, but after last night's experience it has got me thinking what are we doing here."

More to the point, what are they doing there?


North Norfolk MP Norman Lamb said: "Certainly from the people I've talked to in the town, what happened yesterday was pretty intolerable and it is really important that the police deal very firmly with the perpetrators of this."

Well, quite! So what have they been doing?


Supt Malcolm Cooke of Norfolk Police said: "We acknowledge there have been a number of incidents in Cromer over the weekend, which will understandably cause concern.

"However, I can assure residents these incidents have been dealt with appropriately and are of a nature routinely dealt with in towns such as Cromer on a busy August weekend."

Really? Pull the other one, Mal ol' chum, it's got bells on it. Any arrests? No?

Gosh. I wonder why?

I notice that they got the "Tr" and the "ers"in the right order. The middle section must have been lost in translation.

On the plus side, we're now closer to understanding what you need for a winning hand in Victimhood Poker. Apparently, Do-as-you-likeys>Asians.

See PC Jaded, this is why the police have no support from the public any more. If I behaved like that in a restaurant, I'd be arrested, charged and convicted of something. There would be no question about it. Yet pikeys are given a free ride by the police, either because they are told to by their management, or because they can't be arsed to deal with the pile of sh*t that will be involved in trying to arrest them. There no longer is a law for everyone, there is a law for the generally law abiding majority (who are easy to arrest and process) and there is no law for the scum, because its too hard (or politically unacceptable) to deal with them as everyone else is dealt with. Do you think the owner of that restaurant is going to be a fully paid up member of the 'we support the police' club from now on? Or indeed any of the customers who witnessed criminal behaviour being ignored by the police?

Hello Jim. Yes I agree with the bulk of your post. They are a protected species and it infuriates me.
Jaded

@Jaded: then why are you surprised that the public at large increasingly distrusts and dislikes the police? Why on earth do you expect people to support an organisation who will expend all its efforts to prosecute them for driving at 36 mph in a 30 zone, but ignores theft, violence and threats of violence from a 'protected species'? How exactly does 'supporting the police' help Joe Public, when the police will do him the moment he so much as steps over the line in some way (usually of a driving nature) but ignore far worse behaviour from others?

Jim I disagree that the "public at large distrusts and dislike the police". If you read this blog and the Daily Mail then you could draw that conclusion but it's only your opinion. My opinion is different.
I also agree that we clamp down on speeding motorists far too much as well.
Jaded

Indeed, Jim. There can be no doubt that you speak for millions of us. Meanwhile, Mr Plod is very busy with his own nest-building...a little seized snort for the local dealer here, and another compensation claim there. Plus extra overtime for filling in all those forms in triplicate. Fill yer boots, WC Jaded!

Protected species? On whose orders? Let me guess, too much Common Purpose in the upper echelons...

Jim,
As much as I hate the current level of policy making with regard to "protected species", there may be a reason why no arrests were made. The Police were simply outnumbered. For every person arrested, it takes at least 2 officers to arrest and convey the offender to the Police station. If, as is likely in a place such ax Cromer, there are only 4 or so officers on duty, then that cuts the available strength by 50%. To get reinforcements (if there are any available) may take some time, and so the official policy is 'contain and disperse' rather than arrest and charge. With normal offenders and, for the benefit of the snowflake SJWs reading this, I would hesitate to call travellers abnormal (though if the cap fits...), cctv can identify them and they can be picked up at a later date. With those who change their name more often than I change my underwear, and have no permanent address (in this country), this makes it more difficult. Anyway, anyone who is arrested and charged will, once released on bail, disappear into the travellersphere, never to be seen again under that name.
The solution? Apart from refusing them bail after charge, and good luck with that, genocide seems to be the only solution.
Penseivat

From a FOI answer by the DVLA:

Turning now to question c, in which you ask if there is an instance where a car/vehicle can be registered and taxed where the keeper/owner has no fixed residence.

I can confirm when registering a vehicle, the law requires the keeper of the vehicle to provide an address at which he can be reached. This enables the police and other enforcement agencies to contact the keeper or his/her dependants in the event of a road traffic accident or in conjunction with a criminal offence. [my bold]

While it must be difficult dealing with a highly mobile population which is likely to plead discrimination if subject to any special measures, surely this fact provides the police with enough leverage to make arrests and pursue offenders - always assuming different forces can/will share information.

I beg to correct you, Sir. Humberside Police began a prosecution against me which is now 12 months old; adopted by CPS in default and still running after four pre hearings, for travelling at only 35 mph FOR TWO SECONDS whilst overtaking a much slower van.

In the matters of a home burglary and other thefts at my home several years ago, I am still awaiting police action.

"There can be no doubt that you speak for millions of us". Only MTG could write that and really believe it. He really does think he speaks for the masses.
My opinion is my own Melvin.I don't speak for anyone else or be so pompous to think that millions of people agree with me.
Answer in Latin please. It's very impressive.
Jaded

Aren't you making an assumption: that traveler's vehicles are registered and taxed?

So now the mob rules

I lived (alright 'resided') in Cromer until recently. Infact the story of my adult life is the story of my trying to escape the fucking place. As to the story, it's all due to the Carnifool. Every year there seems to be a risk in 'incidents' and mass heavy duty drinking. But it's a big draw to the town -unfortunately it doesn't just draw in those who came to Cromer on holiday thinking the weather would be such that the kids could spend all week on the Dog Shit Toilet (or 'beach' as Norfolkers also call it) playing among the used condoms and beer cans.

If not, surely the answer is straightforward - spot checks and immediate confiscation (including trailers and contents) of any untaxed or uninsured vehicles until the paperwork is complete. As a bonus, to avoid discrimination, the same rules could helpfully be applied to the boy racers of my local town.

According to the FOI answer, their usual practice is to appoint a representative to receive relevant DVLA mail etc; a few tweaks in the legislation to increase liability would make that role potentially a very unattractive proposition.

McGrath,
When these people register a vehicle, they give a permanent travellers site (an oxymoron) as an address. A check made there will show that someone of that name does live there, though not necessarily the keeper of the vehicle - I hesitate to use the word 'owner' as there is a good chance the vehicle has been nicked and the plates changed. A check on the engine/chassis number will reveal the truth but the Police need just cause to check.
Penseivat

"On the plus side, we're now closer to understanding what you need for a winning hand in Victimhood Poker."

And here I thought Islam was the ace!

"See PC Jaded, this is why the police have no support from the public any more. If I behaved like that in a restaurant, I'd be arrested, charged and convicted of something."

"The Police were simply outnumbered."

Aren't they also 'outnumbered' when they crack down on football hooligans? And car cruisers? And the Countryside demo?

Not convincing any more, I'm afraid. We know they can. So why don't they?

Quite! It's not the 'resources', it's the lack of WILL.

"So now the mob rules"

It would appear so. But the police are very particular about precisely WHICH mob gets to rule...

"I lived (alright 'resided') in Cromer until recently. Infact the story of my adult life is the story of my trying to escape the fucking place. As to the story, it's all due to the Carnifool."

So it's expected, and can be planned for. So there's no excuse for the police?

"According to the FOI answer, their usual practice is to appoint a representative to receive relevant DVLA mail etc; a few tweaks in the legislation to increase liability would make that role potentially a very unattractive proposition."

Ah, if only our top legislators weren't too bust with making 'saying mean stuff on Facebook' a hanging offence...

"A check on the engine/chassis number will reveal the truth but the Police need just cause to check."

What do you think of MacHeath's suggestion?