Another 'Guardian' Headline That's Not Quite Accurate... 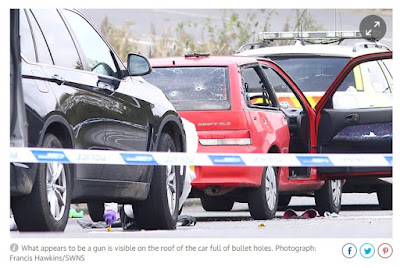 There's clearly two bullet holes in the driver's rear wing. What, someone couldn't hit the window from that distance?


One witness claimed to have heard five shots, another said there were 10.

The 'Guardian' homes in on the real issue with marksmanlike precision:


It is believed the man who was shot dead is white.

Has anyone seen Ben Stokes since??????

What a shame. My flatscreen TV is so 2011 and my trainers need replacing as well.
Jaded

Probably Merlv is still breathing after that little lot (unfortunately).
Probably Melv is not the same Melv as the paedophile still hiding from the law (but not necessarily).

I say sit back and wait for what unfolds, as of about 5pm tonight it was revealed that the car was called in by concerned MOP's at 8.30am that morning in the West Mercia force area so I would predict that the IPCC will now be seeking to hang out to dry the call handlers in West Mercia and Gloucester police as well.
Hint: Even on the M5 you can go a long way quite quickly.
I'll leave the critique of the shooting to the X-Box and Call of Duty experts who have never handled a real firearm or been near a rapidly unfolding incident.
Retired

The policing expert has spoken. Everyone bow down to his superior knowledge.
He's probably mentally ill though
Probably Jaded

"What a shame. My flatscreen TV is so 2011 and my trainers need replacing as well."

"I'll leave the critique of the shooting to the X-Box and Call of Duty experts..."

I could never get on with those games, they require quick reactions I just don't have...