What Do These Incidents Have In Common?

A veteran shopkeeper in Bream, near Lydney, is mystified as to why he had a window shattered in apparent catapult attack by vandals.

Police believe a BB gun or catapult was used from Garrick House multi storey car park which shattered a pane of glass at Waitrose.

A cygnet was found dead in North Dorset after possibly being shot at with a catapult, say police. PC Rob Hammond, of Blandford Neighbourhood Policing Team, discovered the cygnet on the River Stour at Stour Meadows in Blandford on Saturday evening.

Well, none of them apparently warrant an armed response: 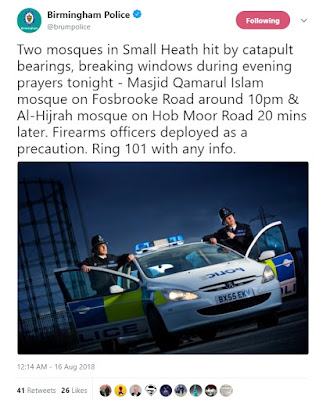 Nor increased police patrols.
Posted by JuliaM at 09:00

Email ThisBlogThis!Share to TwitterShare to FacebookShare to Pinterest
Labels: equality, identity politics, one law for all, policing