They've Still Not Found That Dictionary Then...?

A supermarket was evacuated after a suspected thief threatened to jump from a balcony after being apprehended. 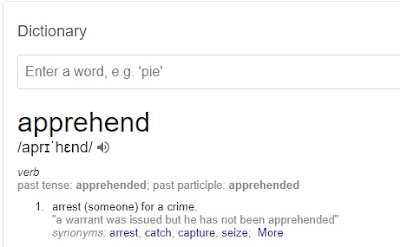 Eyewitnesses reported vodka and steak being stockpiled in a pram before a group of people were stopped by security guards at the Asda store in Basildon's Eastgate Shopping Centre.

It is alleged suspects began climbing over shelves throwing items on the floor and threatening to hurl glass vases at customers on Tuesday evening.

They were hardly 'apprehended', then,. were they?
Posted by JuliaM at 09:00

Jump! You fucker, jump!
Jump into this here blanket what we are holding
And you will be all right
He jumped, hit the deck, broke his fucking neck
There was no blanket