A mother is pleading to be moved out of a mouldy council flat as she fears it could kill her.

Juliette Mottram has lived in the Ventnor Villas, Hove, property with three teenage children since February 2

Since then, she says, large patches of mould have grown across the flat.

The mother of five, who suffers from an immune condition, fears it is going to aggravate her illness.

Oh, these stories seem to proliferate faster than COVID-19...


Brighton and Hove City Council said she has repeatedly refused its staff access to the three-bedroom flat to fix the issues.

She seemed happy enough to invite the media though...


When The Argus visited the property there were large patches of mould across the flat.

They took lots of pictures. Which didn't really help her case much: 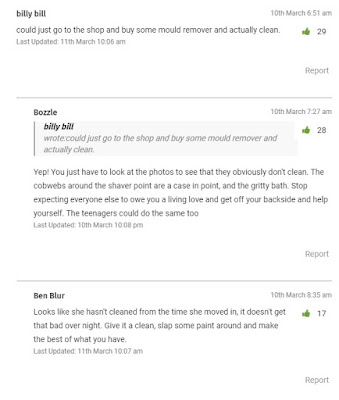 A little snippet about her past appearance in local newspapers also appears in comments.
Posted by JuliaM at 09:00