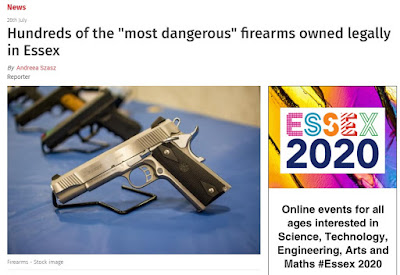 Who on earth is objecting to legal gun ownership?


...said it was concerned by the prevalence of the weapons across England and Wales, which it said are similar to those used in mass shootings around the world and are not part of shooting traditions.


Covered by firearm certificates, section 1 shotguns are multi-shot weapons that contain a magazine holding more than two rounds. Figures from the Home Office show there were 700 of these guns in Essex in 2019-20, a two per cent rise on the year before.


GCN said it is concerned by the legal status of multi-shot shotguns and semi-automatic 22 Calibre rimfire rifles.

Don't tell me that if you're sucessful in getting these banned you won't immediately go after Section 2 shotguns. Because everyone knows you will.


Peter Squires, professor emeritus of criminology and public policy at the University of Brighton and member of the organisation, said: "Both resemble the types of firearms used in mass shootings around the world, and by virtue of their magazine capacities and rapid-fire potential they represent the most dangerous civilian-owned guns.

"The fact that that they are few in number and little-used makes the case that they are manifestly not part of mainstream UK shooting traditions."

What do you care about shooting traditions? What do you even know about them?


The British Association for Shooting and Conservation said certificates are only granted following a rigorous licensing procedure.

Firearms director Bill Harriman said: "The number of section 1 shotguns held on certificates has not increased significantly and only relates to a small proportion of the total number of legally-held shotguns in England and Wales.

“Our licensing system is among the strictest in the world but is still open to all. BASC works continuously to see the right tone struck so that participants are not disadvantaged but public safety remains acceptable.”

And the government agrees.


A Home Office spokesman said: "The UK has some of the toughest gun laws in the world.

“Before anyone receives a firearms certificate, the police must be satisfied that the person is fit to possess one and they have powers to revoke certificates if there is a risk to public safety.”

So sod off, hoplophobes.
Posted by JuliaM at 10:30

Legislation is the heavy burden for the honest and upright; affecting those willing to submit to sensible controls for all. Insofar as it concerns guns, we have already arrived in an era where just about every plod, criminal, low-life and scum sucker has at least one very effective metal/chemical weapon with which to blind or despatch an unarmed citizen, into the next world.

Many honest folk, who loathed the evil history of weapons all their lives, will soon be forced to think the unthinkable. Self-defence has to be allocated a new, high priority for those tasked with the protection of vulnerable dependents. A responsibility which is clearly more important than blind obedience to any laws.

I gave up my firearms licence. They don't want you to have one, but if you do, the law says you have to use it regularly or they'll take it off you
The only shooting club close to me was a fairly dank warehouse and all the members were doddering old men who thought they were hilarious
My .22 semi auto rimfire was a £40 pile of crap. I don't even think those folding stock handguns in the photo are legal. I'm sure they have to have a long barrel and a fixed stock to make them over a certain length
I kept my shotguns though. You can use them as often or as little as you want. I'm a terrible shot, but clay pigeon shooting in good weather is a great day out
The gun grabbers won't try to get shotguns banned as too many lordy lardy dahs use them, but they do keep trying to get the licence fee increased, supposedly to cover the costs, but really to price working class people like me out of the sport

Any idea of the firearms held by those lovable rogues in the 'travelling community'? Bet they've plenty, the little rascals.

Lots of things are dangerous.
Look at the numbers of people who die in beds.
And I believe that men can choke on oranges.
What is worse things are being done for the fun of it.
So many things to ban, so little time.

Interesting that the illustration shows handguns which are illegal. Also irrelevant, of course, to an article about rifles and shotguns. These peope really do make a high art form of lying, don't they?

Handguns like those in the picture are not illegal. They are in a classification of their own and a license can be applied for. It is just rare for an ordinary person to get one. An MP of course has no such issues because they make the rules. Funny that.

Like in the US gun owners are rarely done for crimes. They are among the most law abiding citizens in the UK.

The government, spit, needs us to be disarmed. To allow a small percentage to be armed with restricted firepower isn't an issue. They can always go round and pick them up when they need to but they won't allow general ownership like the US. To them the process of persecuting someone who kills a citizen and jailing them for a few years is much better than us killing one of these scumbags in self defence.

I have two multiround shotguns in my house. Both with nasty 'short' barrels. And an AR-15. And bolt-action 5.56. And a .44MAG lever action. A .22LR semiauto rifle. And three handguns.

The difference might have something to do with those guns.

"Many honest folk, who loathed the evil history of weapons all their lives..."

"They don't want you to have one, but if you do, the law says you have to use it regularly or they'll take it off you"

"Any idea of the firearms held by those lovable rogues in the 'travelling community'? "

I bet a check of licensed firearms would result in 'Computer says 'No'...'

"Interesting that the illustration shows handguns which are illegal."

You have to think of the audience for these rags... ;)

"The difference might have something to do with those guns."

A hasty, pasted response, JuliaM. One that demonstrates your persistent flaw in grasping challenging concepts. I carefully avoided postulating that weapons are themselves inherently evil. Reference was being made to a long history of their use in evil, cowardly acts.

There just may be an evening course in 'comment marking' at a polytechnic near you, ma'am.