The Female Equivalent Of 'A Karen'...

...shall henceforth be 'a William':

The victim was sent to hospital where he was treated for a severe laceration and given stitches for a head wound following the scuffle.

Along with a friend, William had been arguing with South Western Railway staff by the ticket barrier because one member was not wearing a mask.

Err, maybe you should have merely concerned yourself with those who were wearing them incorrectly? 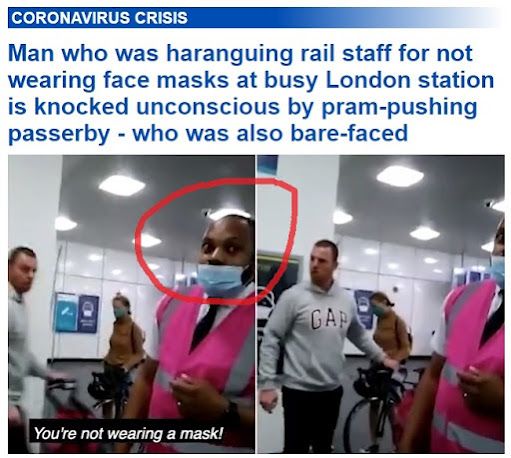 William said: 'My friend asked one of the station staff a totally reasonable and polite question: ''are you exempt from wearing a mask''.

'She'd snapped back saying ''none of your business''.

Because it isn't. She may be exempt.

The 'Mail' has tracked down the passenger and interviewed him. He says, without any apparent trace of irony:

'This man had nothing to do with it. He decided to interfere in something that was none of his business.'

He said: 'I had a mask on and so did most of the other passengers, so I wanted to know why the same rules did not apply to station workers?'

It never occurred to you to wonder why it was 'most' of the other passengers then?

As he was speaking outside the station, Mr Adam was approached by security staff who asked him to move on. He told them: 'You people are a disgrace and as far as I'm concerned, if you're not wearing a mask, you're spreading a plague.'

At least it's not a plague of self-righteous morons, eh, William?

South Western Railway said the member of staff who was not wearing a mask had a medical exemption.

No doubt muttering under their breath: "...now sod off!"

"... would be 'a Karen'". Unless you're buying in to the modern view of gender fluidity?

There are some inconsiderate chumps who consider themselves immune to the virus, or just don't like the discomfort of wearing PPE. This is new territory for all of us...but the overly timid folk will say nothing to the arseholes who refuse to wear a mask or draw it under their chin once they are comfortably seated on a moving train.

These two groups are as bad as each other, JuliaM. Which one do you belong to?

*To which one do you belong?*

The masks are nothing but a placebo. Non of these self righteous buffoons had any problem with not wearing a mask until the government declared that we needed to. This implies that such people are so phenomenally stupid that they think that the government is competent. It seems that MTG belongs to that group.

Whether a comment is mine or not, nobody will be influenced by your public support of it. You now avail yourself of a tiny audience and I am forever grateful for any critical attentions made in obvious ignorance.

What happened to free speech? He's inured by a twat with a baby. But then it is where it is, and Scousers are only one step away from being Irish, so that makes them stupid as well as violent. You know how the kid will grow up with a father like that.

As a William I object, perhaps thus proving the point.
But I think that Dick is much more appropriate and already in common use.

I covered this one, too. The member of staff he was haranguing was medically exempt, so this chump was in breach of the disability discrimination act. If justice is to be done, he should be prosecuted and fined good and hard.

As for the efficacy of masks, the BMJ published the outcomes of randomised trials several months back, concluding - fairly predictably - that they are not an effective means of controlling the spread of a virus.

So there you have it. Dr LongRider has already dealt with this...

I'll second that, Longy!
He's like a bloody "Speak Your Weight" Machine.

Ooops! Mea culpa, everyone! I'll leave the headline as it is though!

"Unless you're buying in to the modern view of gender fluidity?"

"These two groups are as bad as each other, JuliaM. Which one do you belong to?"

"The masks are nothing but a placebo."

Or a test to see how far they can push the populace. I'm noticing fewer and fewer mask-wearers as the weeks drag on.

"You know how the kid will grow up with a father like that."

"...so this chump was in breach of the disability discrimination act. If justice is to be done, he should be prosecuted and fined good and hard."

Bet you a pound to a penny that never happens...