Why Do We Always Lag Behind The US?

US Government: "That's enough of that, thanks!" 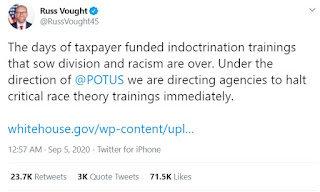 UK Government: "Here's some more taxpayer cash to tell us how awful we are":

Parliament has paid Challenge Consultancy £7,000 to design a course on ‘unconscious bias’ for MPs. In total the company, which has also trained BBC staff, has raked in nearly £800,000 from Parliament for conduct lessons in what one MP last night called ‘an absurd waste of taxpayers’ money’.

An outline of the training leaked to The Mail on Sunday says MPs will be schooled on words they should avoid and woke-friendly history as part of the training.

How successful have they been elsewhere?

The firm boasted that previous clients who received similar training include ‘people managers at the BBC’, Bafta and Oscar judges.

If Boris lacks the balls to kick this into touch, I'm sure Cummings doesn't. What gives?

Email ThisBlogThis!Share to TwitterShare to FacebookShare to Pinterest
Labels: ffs!, identity politics, long march through the institutions, throwing money down the drain

Priti Patel was asked for comment but she is traumatised by 'all too often' being the only non-white person in meetings and having to watch veterans attempt to defend statues.

Interesting posting, thanks for keeping me informed.

They would have to work quite hard to tackle my conscious bias before that.

No. I think that this company went to the BBC to get training.
There has been some jiggery pokery in the accounts of one or both of these organisations to make it look the other way round.
A lot of people are thinking.
Allegedly.

"They would have to work quite hard to tackle my conscious bias before that."

Certainly someone needs to nudge Priti awake from time to time...