It's A Mystery Why We Have A Dangerous Dog Problem, Isn't It?

An out-of-control dog has injured a number of people in an incident in Chippenham. At least six police units responded to reports of the animal biting several locals in John Coles Park on Malmesbury Road this afternoon (Saturday 16 January).

At least one child was rushed to hospital for treatment at around 2.15pm whilst police officers, the dog’s owner and vets tried to bring the dog under control.

The animal reportedly escaped a house in the Greenway Lane area before running into the park and carrying out the attack.

Did the police act this time? Reader, they did...

“Officers attended and were able to bring the dog under control with the assistance of a local vets.”

What? Why? An ARV should have dealt with this, permanently!

Following the incident, the dog was allowed to go home with its owner...

...but an investigation has been launched and police enquiries are ongoing.

Meanwhile, over at the local dog-worshipper's Facebook page, is there concern for the injured children and their own animals from this known threat? Reader, there is not: 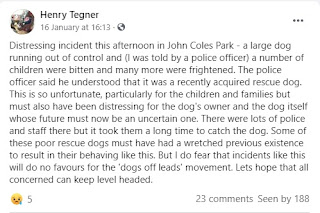 Yes, let's be concerned about the future of the poor little doggie-woggie and what restrictions might get put on dog owners (Ed: Ha! As if!) and not the mauled child.

Surely there must be some civil or private legal options? How can someone be negligent of their dog without repercussions? I woukd at the very least be seeking the dog's destruction, compensation and the owner being restricted from owning dogs for a time and until they had completed a dog welfare course.

As a former great dane owner(?), I can tell you that even the best natured large dogs must be under control AT ALL TIMES. Especially when on long walks in countryside, owners should be able to recall a dog at any time or keep them on leads. I went to regular dog-training classes, (and enjoyed them - even if mine failed 'sausage refusal') and would not object to such training being made a requirement. Doers anyone else remember Barbara Woodhouse and "Walkies"? - still makes me smile, but she was ruthless with a badly behaved dog (rightly so in my opinion)

I think the problem is that the current owner is one of the protected people that seen to get away with murder in the UK.

And there was me thinking that the Police were an extinct species. Ivan is quite right there are some people (and their animals) who are above the law in our PC Woke nation.

"Surely there must be some civil or private legal options?"

It's usually not worth it as these people have no assets.

"...even the best natured large dogs must be under control AT ALL TIMES. Especially when on long walks in countryside..."

Ireland has got the right idea - fed-up farmers are simply banning dogs from their land.

"I think the problem is that the current owner is one of the protected people that seen to get away with murder in the UK."

No names, even in the Facebook reports, so hard to tell. I do wonder if the animal was an import, though.

"And there was me thinking that the Police were an extinct species."

Not extinct, just 'evolved' into an unrecognisable species...