The blazing headline in the 'Daily Fail' says it all: 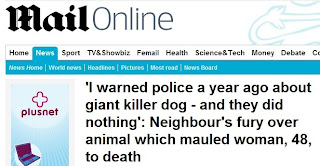 Except, no, he didn't warn them that a 'giant, killer dog' would one day turn on its owner's lodger and tear out her throat.
In his own words:

Minicab driver Burhan Yanbolu said he told the police and the local council about the animal after it tried to break down his fence and get into his garden.

Neighbours said police had even visited the address where the dog lived in October last year but said they were unable to do anything because no one had been injured.

The neighbour's daughter's chihuahua got through the fence into our garden yesterday. Now, OK, this is a beast the size of a cat (actually, smaller than one of our cats!) and I could probably drop-kick it the full 100 feet length of the garden, should it have been vicious, and should I have feared for my toes, but still, same point.

I can't wait to see if Kit Malthouse seizes on this tragedy to advance his pet policy...

A historian, novelist and bansturbator is already on the case.

During 2000, in the United States alone, 650 were killed by "a fall involving bed, chair or other furniture."

I trust our Bansturbators will be leaping into action to save us from such dread menaces as kitchen tables as they appear far more deadly than the humble canine?

Leap carefully though guys, it's a jungle out there.

"A historian, novelist and bansturbator is already on the case."

" It is impossible to ensure that all dogs are properly trained. What is possible is to ban the types of dogs that have a propensity for killing people.

That may be unfair to all those who properly raise such dogs, but their rights are an irrelevance compared to the right to life."

Behold the Righteous in his natural habitat! Only his rights are true rights.

"I trust our Bansturbators will be leaping into action to save us from such dread menaces as kitchen tables as they appear far more deadly than the humble canine?"

Since when did logic and real risk assessment ever feature?

"Put down the dog and owner - problem solved. "

Beeb radio news have not made it clear whether the guy set his dog upon the woman or if the attack was just an 'accident'; he's been released on bail so perhaps the latter?

I personally feel very threatened by furniture, and regularly call GMP's excellent Wardrobe Squad to check for lions, witches and parallel universes. They have found plenty - if only they weren't ;et down so badly by the useless rest of the CJS! Fortunately, we have no problem with big dogs, as the supply has run dry owing to the lions.