Just A Load Of Balls…

Southend Council has introduced two rows of balls on Marine Parade to define where the road starts and the pavement ends.

However barman Stuart Lloyd, 30, of Hainault Avenue, Westcliff, is not impressed.

He said: “They just don’t blend in with the rest of the colours of the stone work that’s used here and there’s no clear indication what they are for. The black doesn’t match anything else in the area. They really are an eyesore.”

As the commenters point out, that's actually the point. If they didn't stand out, you'd end up with a situation where the council would need to find other ways to make them stand out.
And yes, we've been here before...

Jill-Allen-King, 71, the secretary of the Southend branch of the Federation of the Blind, added: “I regularly go on holiday to Majorca and they had similar things there, which they eventually removed because people kept tripping over them. To make it less dangerous, the council needs to bring the kerbs back so people know where the pavement ends and the road begins.”

The council? Admit to a mistake? Never!

However the council is convinced the modern feature will reduce accidents by making pedestrians and motorists more aware of their surroundings.

The pedestrians and motorists that are - respectively - listening to their iPods or fiddling with their mobile phones and consulting their sat-navs..?

Tony Cox, councillor responsible for transport, said: “After the scheme was introduced, we ensured it would be monitored and some form of demarcation was suggested.

“It was thought it would be an added enhanced feature to a scheme which has proved very popular.

“I do not make decisions which are panic measures. I said all along the scheme would need time to bed in.” 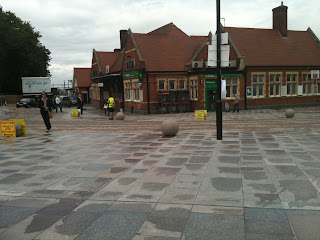 Pictured: Not panic measures. Honestly...
Posted by JuliaM at 11:50

Well .. that makes everything OK then .. obviously a sop to the multi-culti thing ...

Oh BOLLARDS to the council!

Nope, these won't last as they are a hazard as defined by the DDA/DED/Equality Act. (Though to be honest they look like a hazard full stop). It's just a question of whether they get removed before an accident happens or after.

Poor old taxpayer. Pays for the raft of council numpties who came up with the idea; pays for the balls' installation; will pay for their removal; will pay the compo should a partially-sighted person come a cropper before they are removed.

It's surelyonly a matter of time before someone contrives to 'trip up' over one of these.

An ambulance-chasing lawyer will step in (you know the type; cheap suit, even cheaper haircut, grubby fingernails) and sue the council.

They'll settle out of court because by then even they will have worked out that they look like complete c*nts for putting the stupid things there in the first place.

" It's just a question of whether they get removed before an accident happens or after."

Since (as of yesterday morning) they seem to have removed all the yellow warnings from the Vic Circus balls, it's clearly only a matter of time, as Robert says.