Screaming headline in the 'Mail':

Wow! Really?
Well, no. Of course. A far more accurate headline would have been 'Unknown Animals Really DO Lurk Beneath The Waves, Scientists Claim' as Darren Naish (whose new blogsite is here) points out:

Dr Naish told yesterday’s meeting of the Zoological Society of London: ‘Because large marine animals continue to be discovered – various new whale and shark species have been named in recent years – the idea that such species might await discovery is, at the very least, plausible.’

That's not likely to be pleisosaurs, though...
The photo editor appears to have been scraping the barrel with this one, mind you. This is a doozy: 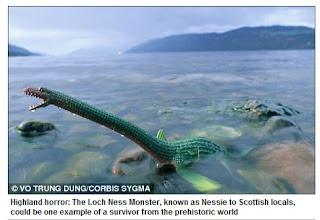 It appears to be a cheap plastic dinosaur placed at the water's edge. If I were Vo Trung Dung/Corbis Sygma, I wouldn't have bothered to copyright it. 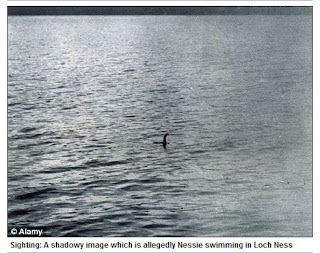 This Loch Ness stuff is the nonsense that won't die, but if you just consider

~ to obtain genetic diversity you need around 50 animals of more or less any advanced species (ie non-bacteria) and thus, there would not be one "monster" but at least 50 and possibly more if the eco-system could sustain them. So verifiable proof could be obtained relatively easily.

No such proof exists. Sorry to "Scully" believers but there it is.

"Unknown Animals Really DO Lurk Beneath The Waves, Scientists Claim"

Not even. "Unknown Animals Might Lurk Beneath The Waves, Scientists Claim".

The King of Wrong said...

Or, as fans of QI know, "unknown animals really DO lurk in your back garden (and everywhere else)" - no matter where you look, you're pretty much guaranteed to be the first person to bother, and you'll see things that nobody has catalogued.

"There IS Intelligent Life On Earth, Scientist Claim"

"No such proof exists. Sorry to "Scully" believers but there it is."

Tut! Scully was the sceptic, it was Mulder who wanted to believe...

"Not even. "Unknown Animals Might Lurk Beneath The Waves, Scientists Claim"."

"..no matter where you look, you're pretty much guaranteed to be the first person to bother, and you'll see things that nobody has catalogued."

And things that native populations have known about for centuries, and probably eaten every day!

The thing about the Loch Ness monster is that as well as being composed of a lot of wishful thinking, bad eyesight and crap Photoshop jobs (even I have done one of them, though I was at pains to point out its phoniness), the monster is likely composed of several different animals and a few physical phenomena.

The earliest Nessie sightings were all on land, or close inshore. Stray moose from various lairds' private collections likely account for many of these, as do swimming elephants from several touring carnivals and menageries in the early Victorian period. Unusual wave patterns in the loch (it truly is a huge body of water, and very deep too) and the occasional stray seal also account for many sightings.

The most intriguing possibility is the hypothesis advanced by Mr Jon Downes of the Centre for Fortean Zoology; outsized european eels.

A parasitic infection in the eel which effectively gelded it would have just this effect; thus neutered an eel would never feel the urge to migrate back to the sea, and would live a long and lonely life in whichever lake it was in, growing to quite a size in the end before it died of old age.

The beauty of the Gelded Giant Eel theory is this: the animal responsible is a known species grown huge. There are always plenty of eels in any freshwater lake, so you don't need a relic population of prehistoric whatevers to form a basis for the monster; you just need a very few unfortunate eels to grow huge and stay in a lake.

Plesiosaurs weren't dinosaurs, but they did breathe air. So any similar animals would be spotted very easily indeed breaking the surface to breathe even if the nostrils were atop their heads.

Too many sea monsters have been seen by reliable witnesses at sea for them to be written off as fiction.

I read it as SA of T using 'scully' as a verb - 'to scully' being to come over all sceptical or make a believer feel like his naive beliefs have been remained shredded and mashed into the ground by a short, cute ginger-haired FBI agent.