Did They Sack Her For The Assault...?

...or because she was eating all the profits?

Jennifer Schwenker went into the McDonald's in Marietta with her sons Ben and Sam and their service dog Barkley to get some lunch on July 12.

Allen, who was off-duty at the time, became angry that the dog was inside and told the mother that it was not allowed, the warrant states.

Mrs Schwenker explained that it was a service dog that was allowed in public places by federal law and offered to show a permit for the dog.

But surveillance footage shows Allen then following the mother around the restaurant and down the hall to the restroom.

As Mrs Schwenker tried to leave the restaurant she dropped her drink on the floor, accidentally splashing Allen, as she looked for one of her sons.

The video shows McDonald's employees trying to restrain their co-worker as she appears to fly into a rage, before allegedly punching Mrs Schwenker in the face in the parking lot. 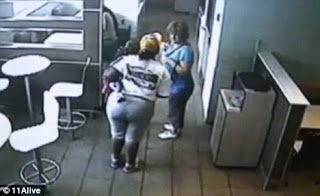 Tiffany Denise Allen, folks, give her a big, errr, hand...
McDonalds have sacked her and are 'co-operating fully with the investigation'. Which is only what you'd expect them to do, isn't it?
It does rather cast an awkward light over their hiring practices...
Posted by JuliaM at 09:45

So that's what became of the funnel covers, now that HMS Ark Royal is no more ..

"...or because she was eating all the profits?"

...only if Mickey D's have started offering a MC Fried Chicken And Watermelon burger.

She looks as if she's smuggling a pair of watermelons in those strides .. ;)

Captain Haddock, show some compassion. She was, no doubt, abused by her alcoholic mother and whatever crack head was 'This Week's Daddy'. And now She has an Eating Disorder after having had to give birth every eyar since she was 12.

She is NOT responsible for being a fat ugly ignorant nigger.

It's her genes and you should be ashamed for making fun of her.

Another Black day at Bad Rock.

A bad case of the Wrong Trousers. The 'six sizes too small' kind of wrong.

The first time I have seen a clip from Gorillas with the Mist.

A very sad story, to be sure.

I do SBC, I really do .. but I reserve mine for those who genuinely deserve it ..

"It's her genes and you should be ashamed for making fun of her" ...

Your description neatly encapsulates the situation ..

This was reported on some of the disability forums some weeks back. There are some nasty, nasty people about. Sort of shithead who would be up for picking a fight with anyone, and chose a defenceless mum and her kids.

"So that's what became of the funnel covers, now that HMS Ark Royal is no more .."

"Another Black day at Bad Rock."

"This was reported on some of the disability forums some weeks back."

At least in the US, they take this sort of thing seriously..