"I was shooting with Eddie Knowles in Malani when I first heard of the tiger which later received official recognition as the 'Champawat man-eater'.

Eddie, who will long be remembered in this province as a sportsman par excellence and the possessor of an inexhaustible fund of shikar yarns, was one of those few, and very fortunate, individuals who possess the best of everything in life. His rifle was without equal in accuracy and striking power, and while one of his brothers was the best gun shot in India, another brother was the best tennis player in the Indian Army. When therefore Eddie informed me that his brother-in-law, the best shikari in the world, had been deputed by the Government to shoot the Champawat man-eater, it was safe to assume that a very definite period had been put to the animal's activities."

Ahhh, I remember the first time I saw this book (and it was indeed the same book – I bought this copy on eBay last year for the glorious illustrations by Raymond Sheppard, along with the others in the series, 'The Temple Tiger' and 'The Man-Eating Leopard of Rudraprayag').
It was at Wantz Library, adult fiction section. 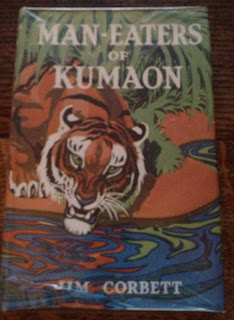 I’d gone over there because I’d exhausted the options at my more local libraries and it was quicker than waiting for books to be shipped to it on the slow ‘reserve’ system.
Thus marked my foray for the first time into non-fiction, for as nail-biting as these accounts are, they are all true. Indeed, only a month or so ago, this story made the UK news; there was one significant difference, though - this case being a matter for the police, who are reported as attempting to 'take the leopard into custody'..!
And these tales are not for the faint-hearted! There are plenty of moments of high-drama. Quite why they never made more of them in the way of film and tv, I don't know. The Beeb had a go, producing a one-off drama titled 'Man-Eaters of India' with Frederick Treves in the role of Jim Corbett. It was quite good, but is sadly unavailable on DVD.
The book I hold in my hand as I write this is dedicated 'to the gallant soldiers, sailors and airmen of the United Nations, who during 1939-1945 lost their sight in the service of their country...'
Posted by JuliaM at 13:30

Wow, blast from the past! This may well have been one of my first non-fiction books, too. It was given to me by an older relative and as such ignored as being 'worthy'. Until I started to read it, that is. Fantastic stuff. I think I had a different edition from yours - mine was blue with a photo on the front, rather than artwork. That's a guess, and I can't find an image I recognise in Google Images, so ICBVW.

It's a historical curiosity now, of course. Men behaving like men, danger seen as something thrilling rather than to be avoided with horror, and of course a practical and sentiment-free method of dealing with problem animals. Not to forget a huge amount of humanity towards the poor people of India, which would today be characterised as paternalistic.

MEOK written today would be full of tranquiliser darts, discussions of ecological niches, non-lethal options and carbon footprints. Oh, and Corbett would be investigated for having an unlicensed firearm and 'insufficient sensitivity'.

I suppose these days we would think of the tigers as socially disadvantaged and so the shooters would now be social workers asked to engage with them in community activities. As for those who were eaten, there would need to be a focus group to assist in consultative arrangements.

I had no idea their maths classes were so dangerous ...

A great book by a real gent and keen conservationist. Corbett was played by Jason Flemyng in a fairly good attempt at dramatising the hunting and disposal of the man-eating leopard of Rudrapryag. The end was slightly shonky due a CGI wounded leopard, plus Corbett approaching and touching the wounded animal which (unless I have misjudged his wisdom from MEOK) he wouldn't have done. Some scary moments though as the leopard terrorises the villagers.

"It's a historical curiosity now, of course. Men behaving like men, danger seen as something thrilling rather than to be avoided with horror.."

Indeed. Something tells me we'll never see their like again, sadly...

"Imagine trying to write a risk assesment for "Shooting a Tiger".."

Heh! Having just had to write one for handling a new bit of work kit, I can only wince in horror!

"...and so the shooters would now be social workers asked to engage with them in community activities."

"Corbett was played by Jason Flemyng in a fairly good attempt at dramatising the hunting and disposal of the man-eating leopard of Rudrapryag."

Yes, I saw that - keep hoping it gets released to DVD, or repeated on one of their digital channels. But it's probably 'non PC' now :(