I am often asked why I started to write poetry. The answer is that my motivation sprang from a visceral need to creatively articulate the experiences of the black youth of my generation, coming of age in a racist society.

On 6 August last summer when the riots began in Tottenham, I was performing at a reggae festival in Belgium accompanied by the Dennis Bovell Dub Band. Two of the tunes we performed were Di Great Insohreckshan and Mekin Histri. It was quite late when we got to our hotel, and we all retired for the night as we had another gig on the Sunday in France. I was in bed when the phone rang. It was Dennis Bovell, a Tottenham resident. He said: "Linton, turn on your TV, riot a gwaan a Tottenham."

Should this article come with subtitles?

If they’d charged in and cracked heads, I suppose you’d have been right behind them? Supported them, praised them, defended them against criticism?
Or would you simply have churned out yet more anti-police bilge masquerading as poetry in pidgin English?

The police have done little to eradicate racism from the way they carry out their duty. The rank and file never accepted the findings of the Macpherson inquiry that they are institutionally racist. My grandson has lost count of the number of times he has been stopped and searched by the police, and he's not a gang member.

Your grandson is black. Who is it that is killing young black men in London? Who is he most at risk from?
Is it Irishmen? Scandinavian grandmothers?
No. It’s other young black men. So don’t be too surprised when the police target the logical threat.

Oh. I see. God forbid the ‘community’ express any displeasure at the actions of criminals…

Ah. Weighing in on the ‘It’s too haaaaaard!’ side, then… 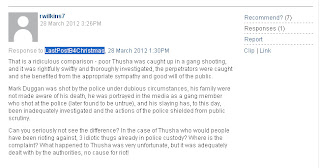 I guess we’ll never know what that one said!

Back to ‘Shut up! SHUTUPSHUTUPSHUTUP! They aren’t the same at all!’ …
It's quite clear to me just why we have a problem in the inner cities, is it to you too?
Posted by JuliaM at 12:10

"That comment is from a well known reader of this and other Blogs who is NOT a police officer.

She has her own Blog and regularly comments in the Guardian. She even links her comment as a clue for you.

See what you did there? Jumping to conclusions. She IS a member of the public.

Here is her Blog http://thylacosmilus.blogspot.co.uk/

An apology right here in the comments section will be fine Ian, thanks."


Oooh look, children. That kind Inspector Gadget (aka Ian) is teaching us best use of a sock puppet on her political blog.

"The answer is that my motivation sprang from a visceral need to creatively articulate the experiences of the black youth of my generation, coming of age in a racist society..."

And people pay to see these dub people perform? Wow.

@greencoat - "The answer is that my motivation sprang from whining self pity and an inability to accept responsibility for my own actions (or in-actions)."

"Oooh look, children. That kind Inspector Gadget (aka Ian) is teaching us best use of a sock puppet on her political blog."