A five-year-old girl has been left scarred for life after she was attacked by an alsatian.

And being the 'Mail', they've sought (and presumably been granted permission to print) gruesome colour shots of the wounds. Lovely to see over your cornflakes, I'm sure. Can't some things be left to the imagination?
So, just how did this attack occur? In the street? A public park?

Abbie Varrow was jumping up and down on a trampoline close to a fence at a friend’s house when the dog leapt up from a neighbour’s garden and seized her face in its jaws.

Oh. And the 'Mail' prints this picture of the fence: 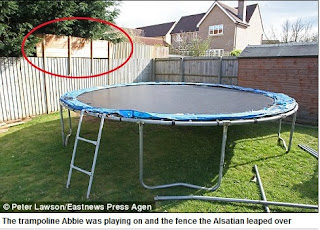 OK. admittedly, we can't see what's behind it - there may be a slope - but...that's some leap! Did the dog have a trampoline too?

Essex Police said the alsatian’s owner had been arrested on suspicion of owning a dangerous dog.

Which is interesting, because last night, they had exactly the same wording as the local Essex newspaper they'd evidently sourced the story from:

Police said that a man has been arrested and bailed until the end of April for having a dog dangerously out of control in a public place.

Now, surely there's a problem with this. As the police have recently started lobbying to change in the wake of the pitbull attack that hospitalised five of them in Stratford, a dog cannot be 'out of control in a public place' if it's actually on private property - which, by all accounts, this one was, as it was still in its owner's garden...

Still, this wouldn't be a modern dangerous dog story if there wasn't a call for some necessary, useless, bound-to-fail call for 'action' from the authorities, would it? And right on cue:

His wife called for a return to dog licensing, which was abolished in the UK in 1987.

Mrs Varrow said this would increase owners’ accountability and enhance other measures including microchipping and putting owners’ details on tags attached to the collar.

And in this instance, that would have achieved...what?

You know where the dog was, you know who owned it. What difference would it have made in this case?

None whatsoever.
Posted by JuliaM at 08:55

....being in charge of a dog allows it to enter a place which is not a public place but where it is not permitted to be and while it is there it injures any person; or there are grounds for reasonable apprehension that it will do so...
That is the wording of the law. If the dog did not jump right over the fence it could be an interesting day in Court. One to watch...

It appears it certainly didn't jump the fence, because the mother was quick to point out in the Essex news that 'it doesn't bear thinking about' what might have happened if it had (i.e. it would have savaged more than just her face)'.

It's one to watch, indeed.

Having been on the receiving end of a dangerous dog (the owner set it on me when I told him he was under arrest), I must admit I favour that wise old sage Jeremy Clarkson after his daughter was bitten by a dog in a public park when the owner failed to keep it under control. "In cases like this, the dog be put down - immediately followed by its owner." In the case mentioned, was the dog dangerous or acting to protect its own property? Perhaps the dog appreciation society and the 'put them down' squad could just cut the thing in two and have half each. Then everyone would be happy!
Plodnomore