No, He Wasn’t Really Made Redundant Because He Was Disabled… 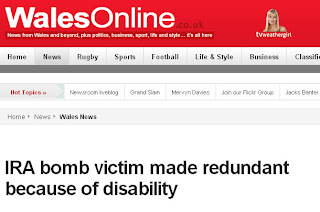 …but I can see why it suits everyone involved to say that he was:

An ex-soldier blinded by an IRA bomb while on active service in Northern Ireland will receive substantial compensation after an employment tribunal decided he had been harassed, victimised and made redundant because he was disabled.

Ummm, no. Sorry. Not on the evidence presented.

The tribunal heard evidence that after a strike which took place in 2008 while Mr Bull was off work sick, unpleasant remarks were made to him by colleagues. His immediate line manager in the estates department, Andrew Offers, asked him whether he would be donating his two days pay to charity, while in Mr Bull’s hearing the council’s estates manager Ron Taylor said during a discussion with other workers, “Don’t worry, people only go on the sick.”

See? Nothing to do with his disability at all.

When Mr Bull challenged him, Mr Taylor walked away, muttering “Just go on the sick again”.

But maybe I’m being too suspicious – maybe they were already bullying him over his disability before the union issue?

Because of Mr Bull’s disability, officers had been in the habit of telling him when they were going out of the office. Some of them stopped doing so and ceased communicating with him.

So, his co-workers were quite accommodating of his disability?

Up to the point he failed to fall in with their unionised workplace; that’s when it turned nasty, not because he has a disability. That simply made it easier for the bullies, by giving them something to target.

The hearing was adjourned until April 26 when Mr Bull will find out how much compensation he will receive.

Last night a spokeswoman for Blaenau Gwent council said: “The council is not in a position to comment on the outcome of any individual cases.”

But I bet it’s quite happy that this is being spun as a disability case, rather than a ‘you’ll get hounded out if you don’t kowtow to the unions’ case…
Posted by JuliaM at 10:55