You Can Taste The Disappointment... 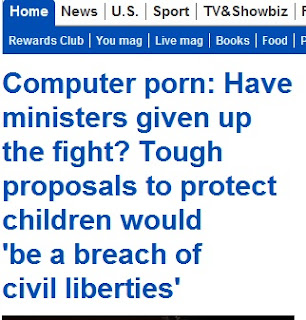 I do love the scare quotes. Who but a complete moron (or 'Daily Mail' reader, but I repeat myself..) could think that the original proposal wasn't a breach of civil liberties?

It seems that the proposal now is for responsibility to lay with *gasp* the parents!


...internet providers would merely give users the opportunity to filter out pornography more easily.

Under these proposals, subscribers would be asked a ‘yes or no’ question about whether they wish to continue being able to access adult material, enabling parents to block access for their children. The question will be asked on only one occasion.

Does that satisfy the pornophobes? Reader, it does not:


...MPs and charities say this will not adequately safeguard children because it will rely on their parents being responsible and proactive enough to ask for access to be blocked.

They say that as if it were a bad thing, don't they?


Tory MP Claire Perry, who last week led calls for the Government to take stronger action, said ...it would be ‘really disappointing’ if the idea was excluded from the paper, adding: ‘If there’s no age check there then we’re not solving the problem. I understand the ideological objections but I don’t think that’s a fact-based argument to make. I just think our kids deserve more than empty phrases like “civil liberties”.’

What a wretched, unthinking bunch these New Tories are indeed. And they aren't the only ones:


John Brown, of children’s charity the NSPCC, said: ‘We would take the view that child safety should take precedence over civil liberties arguments.’

"I just think our kids deserve more than empty phrases like “civil liberties”."

I've just dislocated my jaw. Just as well this woman had already rendered me speechless...

My God! Is this a tiny green shoot of common sense and libertarian-ism appearing in govt?

I hope so but I doubt it,given the pitifully PC mindset of our so called leaders its probably just a mistake on their part,soon to be rectified.

So, logically its the responsibility of parents to "police" what their kids access online ..

Its rather like giving a kid a box of matches and then wondering why the cat has been singed, or the house burned down ..

Parents need to get a grip and stop expecting the State to spoon-feed them .. Likewise the State needs to stop doling out the bloody spoons !

So much control desired of the parents...yet so little of the children...and especially those children who do not actually have parents.

In the words of Benjamin Franklin, "They that can give up essential Liberty to obtain a little temporary safety deserve neither Liberty nor safety."

Forgive me if I'm missing your point Tatty ..

But if I can draw a comparison, expecting kids to "police" themselves is somewhat akin to letting a child loose in a sweetshop and expecting them to be selective as to how much they consume .. doubtless, some kids would do that naturally, whilst others would inevitably make themselves sick ..

Therefore its the responsibility of parents to "police" and regulate their children's activities, online or otherwise ..

In the case of children without parents, then the responsibility must fall upon those acting in Loco Parentis, be they Grandparents, the Local Authority or Orphanage management ..

Years ago, my then wife, whilst hooking-out his mucky socks, found some "top shelf" mags in our lad's bedroom (he'd be about 12 at the time) .. She discussed the matter with my me and I agreed I should speak to him about them ..

Whilst she was horrified, I took a rather more worldly view (probably because I'd served in HM Armed Forces).. I explained the effect they'd had on his mother and asked him to be a bit more considerate .. Job done ..

I certainly didn't go rushing to the papers or my MP, demanding and bleating that they should "do something" .. Not their business ..

This whole idea of internet censorship, proposed by Claire Perry and supported by the Daily Mail, will, if RIPA is anything to go by, suffer from the almost guaranteed mission creep ..

Result ? .. Blogs like this one .. and many others which criticise aspects of government policy will be closed down .. just like RIPA was misused by local councils to permit the introduction of dustbin "spies" ..

Captain - You're not missing my point...if fact, you're illustrating it beautifully :)

"Result ? .. Blogs like this one .. and many others which criticise aspects of government policy will be closed down"

Until (and unless) EVERY photo/video hosting provider on the planet classifies EVERY single file they carry, complete control of what's delivered will be impossible. Due to the constantly changing nature of peoples uploads this would be a mammoth undertaking - and many links that are posted lead to encrypted files anyway. I read that the Chinese are getting fairly advanced with "near real time" deep packet inspection, but to apply this to every link that every UK customer tries to view will require staggering computing power, and lead to major slow-downs.

As the Captain has said, it's the parents responsibility to watch over their offspring. If they're not prepared to (or technically incapable of so doing) why should the rest of us suffer yet more state intrusion? And who pays for the web enabled "smart phones" kids always seem to have these days? £20-30 a month isn't small change in my book...

Personally I think that prudery is probably far more harmful.

This is just more bansturbation - now that's something that should be stopped !

Yes, I have an issue with people who tack "phobe" on the end of things, e.g. homophobe. There may well be an issue there and it might be time people recognized the difference between adults and children.

Its also highly likey that there was some, unknown and utterly pointless Senator in Pompeii who decided to stage a campaign against the "porny" wall paintings in some of the buildings ..

Honestly, some politicians will go to any lengths just for the cheap thrill of hearing their name being shouted in the Forum .. ;)

"I've just dislocated my jaw. Just as well this woman had already rendered me speechless..."

It was quite something, wasn't it? Dave's New Tories in action.

"...given the pitifully PC mindset of our so called leaders its probably just a mistake on their part,soon to be rectified."

No doubt. The NuPuritans won't give up.

"Parents need to get a grip and stop expecting the State to spoon-feed them .. Likewise the State needs to stop doling out the bloody spoons !"

"In the words of Benjamin Franklin..."

" Politicians and campaigners don't have the slightest idea how the internet works."

Or it seems, how human nature works!

"Personally I think that prudery is probably far more harmful."

That, and the desire to meddle for others' good.

"...it might be time people recognized the difference between adults and children."

But the government seems to have spent a lot of time and effort blurring the distinction between the two.

I think, for once, Google is right .

I approve of giving parents tools to prevent their children seeing internet pornography, but the web filtering proposed by the recent parliamentary inquiry will not be very effective. The reason in short is that children use file sharing networks that are not part of the web to download "free" music and films; these networks are awash with porn; and ISPs can neither switch off file sharing networks (because their customers want to use them), nor filter them (because the music and film companies would want their content filtered out too, and the ISPs' customers do not want that). Those who propose network filtering studiously ignore these facts, even though they are fully aware of them, as you will see if you read this.