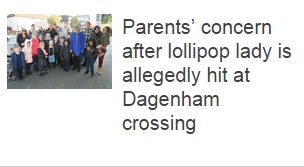 No, no! They weren't concerned about the poor bloody lollipop lady! This is, after all, Dagenham, home of the chavmum:


Parents are concerned for their children’s safety after a lollipop lady is thought to have been hit by a car at an unmarked school crossing.


The patroller for Southwood Primary School in Dagenham has not returned to work since suffering bruising more than two weeks ago.

As a result, children have been tackling the crossing alone – until an enquiry by the Post prompted the appearance of a replacement traffic enforcer yesterday. It is unclear whether this is a long-term measure.

Oh, no! Won't someone think of the kiddiewinks!

“If the lollipop lady doesn’t have a chance, what chance do the kids have?”

Wait, if she takes her brat to school, he's not 'tackling the crossing alone', is he?


With no proper crossing, parents and pupils rely on a traffic island and the council-employed lollipop lady to make it to the other side.

A group of 15 Dagenham chavmums ought to be able to stop an eighteen wheeler in its tracks!


“When she [the lollipop lady] isn’t there, it’s really hard to get across.” Lisa made a complaint to the council a fortnight ago, but says she is still waiting for a response.

“At the moment it’s such a problem [as] we have to walk the long way round,” she added.

Ah. So we're talking about - at best - a 175 yard walk to the nearest crossings? Well, it'll solve Dagenham's obesity crisis!
Posted by JuliaM at 10:30

In the next decade or even less we will have driverless cars. Imagine the chaos when these chavs realise that they can cross anywhere when they find out these cars will automatically stop if they are confronted with an obstacle.

Driverless cars will in theory bring greater safety to the roads and allow a better flow of traffic. They will take away the human element that is so prone to error that is so much effecting adversely both these thing currently. Unfortunately nobody as yet has found a way of automating pedestrians.

I can probably guess the answer to this question. ...

...and if those photos show the typical volume of traffic why is a lollipop lady needed (or do LLs come as standard with the school?)

What about Tufty, the road safety squirrel? Or, failing the advice of a friendly rodent, perhaps a parent could take the time to show their children how to cross a road.

Lollipop ladies (and lollipop gentlemen) are actually a complete nightmare.

They are usually old, with poor eyesight and hearing, and they are often non-drivers with no clue about traffic or vehicle dynamics. They are prone to marching out in front of cars (or even large commercial vehicles) without warning of any sort, convinced that their "lollipops" are some of magic wand that can overcome the laws of physics.

I don't know whether that's what happened in this case, but it certainly was in the case of one who was killed by a bus in my home town a couple of years ago. She was notorious amongst all the local drivers for walking striaght out into the road without looking, regardless of how close any moving vehicle might be. It's just a miracle that none of her charges were killed at the same time.

WY, I once was driving past one when they stuck their "lollypop" out into the road. Thinking that they were about to follow, I did an emergency stop. It turned out that she was deep in conversation with someone, and was moving the lollypop around as an expressive gesture, and they did not cross the road, but carried on talking after staring at me as if I was some sort of maniac.

" Imagine the chaos when these chavs realise that they can cross anywhere when they find out these cars will automatically stop..."

They already do that now, regardless!

"...and if those photos show the typical volume of traffic..."

"Lollipop ladies (and lollipop gentlemen) are actually a complete nightmare."

In my locality, they are mostly to be found at zebras and even pelican crossing! I mean, what the..?

" It turned out that she was deep in conversation with someone, and was moving the lollypop around as an expressive gesture..."