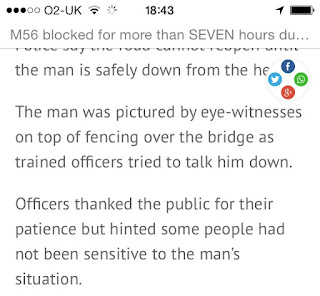 M56 closed in both directions on the approach to Manchester Airport for most of a day thus blocking (f*(£)""ng up) access to the airport for several thousand people who would rather eat airline food than wait for a selfish bod to make his mind up? People were "unfeeling" towards him? Hmmm... I don't think Mr Holmes will be unduly exercised by this little poser will he? GMP on the other hand...
I'm sorry if I sound unfeeling, my own brother in law tried to take his own life so I know the pressures but there are better ways than this.

Anonymous above must know the rest of the ditty. I don't, so could he/she/it please remind me? Something along the lines of; "... into this 'ere blanket wot we are 'holding for you. 'E jumped, 'e fell, splat, there was no blanket.". I suppose such childish rhymes are now banned unless they carry trigger warnings.

Honestly, what has happened to all the snipers when you need them? I blame the lack of grassy knolls.

I was walking down the street one day when I saw a house on fire. There was this man, shouting and screaming from an upper storey window, to the crowd below. "Jump, you fucker jump; into this 'ere blanket wot we are 'olding, and you will be alright."

He jumped, hit the deck, broke his fucking neck. There was no blanket.

It goes on in the same vein, but that's more than enough.

Better ways to suicide, yes. But this seems to be the best way to get attention. Maybe that's what most of these really want?

"Honestly, what has happened to all the snipers when you need them?"

Most of them have trouble hitting a horse! A Mancunian might be to difficult.