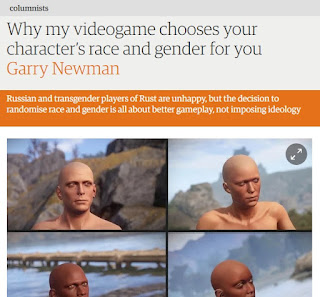 Originally every player appeared in game as a white bald guy. We were still in the early stages of development and had other things to focus on. Recently, though, we decided to change this. We decided that we didn’t want players to pick their own appearance. We felt that player customisation had got a bit out of control in other games. And we didn’t want to spend six months making a player customisation tool – we wanted to concentrate on the game. We also wanted the appearance of the players to be consistent over time. A survivor shouldn’t be able to attack another then come back later with a different gender or race and befriend the same player. They should be recognisable consistently and long-term – so anyone likely to commit a crime would be more likely to wear a balaclava or a face mask.

So you could have opted to make your characters aliens. Or monsters. But no, you wanted human protagonists.

So...you came to this conclusion? And now you're upset that others have called you out on it?


Inevitably, there are people who like it and people who don’t. Some players have praised what we’re doing. Like us, they think that who you are in the game, your race and gender, makes no difference to the actual gameplay – and are happy to have the diversity. Others aren’t so positive. They feel that playing a gender or race that doesn’t match their own is detrimental to their enjoyment.

And it seems you've calculated that there's not enough of the latter that you can afford to piss them off. Hmmm. Not sure I'd make that call, but it's your company.


Here’s one of the many messages we’ve received from disgruntled male players: “Why won’t you give the player base an option to choose their gender? I just want to play the game and have a connection to the character like most other games I play. Not have some political movement shoved down my throat because you make the connection we can’t choose our gender in reality so let’s make it like that in game too.”

Sounds like a fair cop to me! But no, no. Of course, it's all about the gameplay. Isn't it?


Ultimately the decision comes down to gameplay. We don’t believe that letting you choose your race and gender would improve the game. On the other hand, randomising everyone’s gender and race meets all our requirements. We get an even spread of races and genders that make players more identifiable – while at the same time making the social aspects of the game much more interesting.

Note the emphasis: we, ours. Sod the customer, they'll do it our way, or the highway!

Which may well prove to be your undoing. See, I prefer - given the option - to create a female avatar. But, if the game's good enough, has a rich enough story, have no problems playing as Takkar, or Geralt of Rivia, or Gabriel Knight. Just as plenty of chaps have no problem playing Lara Croft.

But survival games are ten a penny these days. Why should I not simply play someone else's game instead?
Posted by JuliaM at 11:00

"But survival games are ten a penny these days. Why should I not simply play someone else's game instead?"

Yes that is known as democracy real democracy not the superficial stuff we have in parliament that is little better than dictatorship as there is little room for individual choice. Free markets are where democracy and believe it or not socialism plays out.

Every market allows the individual to vote with their wallet and at the same time contribute to the betterment of the collective. Wealth creation and redistribution of that wealth occurs there. Money moves from person to person and place to place. It takes people out of poverty and forges social justice as it needs rules that spill out from the market to other parts of society.

Puzzled? Of course you are because progressives say that only government can create social justice and the extreme of them also say that governments can create wealth as well. My contention is that government can do neither. Free market capitalism took us from mud huts and serfdom to the standard of living and civil liberties we enjoy today. Socialism when it is tried on it's own takes that process into reverse. The left may say it was them that agitated and forced social change which they did with very mixed results but they do not say that what they did would not have been possible without the engine of capitalism to carry them.

Well, even Arsebook recognises a 100 genders, so it might take a while to actually get down to the game play.

Okay, I will admit it: whenever I have played games like this my characters are always female. You see -- and don't tell anyone else this, please -- I am a male and I have this problem. It's just that I prefer to look at females hater than men... I know, I know, I need to be publicly humiliated for this deviation and corrected with the full force of sneering and name-calling that only our ever-loving, considerate SJWs can muster. However, there we are. So it goes.

But if I can't play what I want in Rust then I am grateful for the warning: I will therefore never, ever play Rust. In which case, the gameplay might be the greatest evah but I will never pay for it to know.

Good work, developers! People like you keep reducing the market but never mind. Like all good SJWs you know that the government will step in and bail you out. Long live the gubbermint!

For hater in my provisos post, please read 'rather' as i am not Hater McHateface at all.

"The left may say it was them that agitated and forced social change which they did with very mixed results but they do not say that what they did would not have been possible without the engine of capitalism to carry them."

A truer word was never said.

"Well, even Arsebook recognises a 100 genders, so it might take a while to actually get down to the game play."

"It's just that I prefer to look at females..."

Heh! I once asked my brother why all but his initial characters in 'World of Warcraft' were female. He figured out that, if he was going to be watching an arse most of the time (since 'WoW' is in third person) it might as well be a shapely one... :)

"I will therefore never, ever play Rust. In which case, the gameplay might be the greatest evah but I will never pay for it to know."

It doesn't pay for any company to piss off its fanbase for the sake of people who probably aren't fans anyway.