Which Part Of ‘Communal Garden’ Don’t You Understand?

Stephanie Cossington, 30, put the goalposts in the communal area of the Ashleigh flats, in Sanders Road, Canvey, for her son Charlie, ten, and daughter Grace, four.

However, Together Property Management has said the items need to be removed and will be taking action if they aren’t gone by Wednesday. 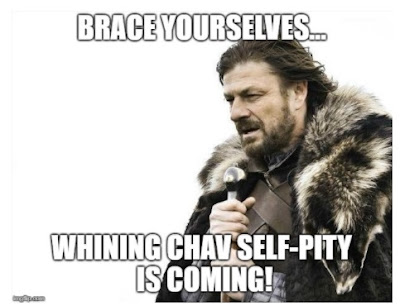 Mrs Cossington (Ed: yeah, me too!) said: “The only thing that’s left out there at night are the goal posts.

“When they told me about it, I just laughed. I thought ‘really?’ It’s some plastic goal posts for children.

“He’s a ten year old boy playing by himself. He’s not hurting anybody.”

Have you tried the 'Someone else should have to pay for my lack of foresight' excuse?


“I live in a one bedroom flat with two kids. There is no room for storage. So where am I supposed to put it.

Well, that's not working. What about the old 'Waaah, they just hate kids!' one?


“Personally, I think they don’t like children playing outside.”

Hmm, no, still not working. How about 'What's the fuss, there's nothing stating I can't let my kids run riot!' one?


“It’s not blocking the path since it’s in the middle of the grass. It’s only held down by a few pegs.

“There’s no signs saying that they can’t play out there. So why is there a problem now?”

Nope, it's time for the Nuclear Option.


“My son has ADHD and having the goal posts there really helps him out. Usually he takes his medication before he goes to school. So, by the time he’s come home, they’ve worn off. He doesn’t play with a big group of kids so he’s out there playing football on his own to burn his energy off.”

The comments are....well, you can imagine! And in them, this little nugget: 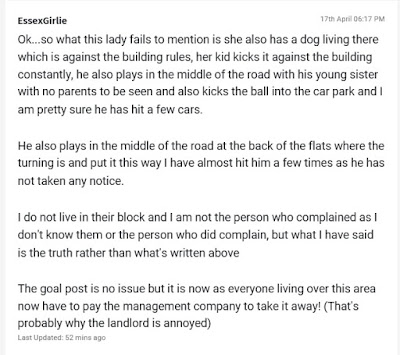 At this point I believe it is traditional to add the phrase 'the father could not be reached for comment'.