"Alexa, Show Me Something That Defines 'Fatal Naivety'...!"

'Sunday Times' writer on a plane, realising there's a detainee being deported:


I did not stage a passenger revolt. Earlier this year holidaymakers had stopped a plane taking off with a Somali on board, only to discover he was a gang rapist. I had no interest in halting the deportation of a criminal, but I was determined to hear his story.

And 'story' is rather more accurate than she intended:


His name was Adnan Hashi, he said, and he had turned 20 just a few weeks previously. He claimed he was being deported for “weed”; after I scoffed, he admitted it was for selling class-A drugs.


Hashi said he had been living in Britain since the age of six. He insisted he had no relatives in Somalia and no connections there.


He had a strong south London accent and was plainly terrified.

And that means he shouldn't be deported?


...my sympathy was tempered by the knowledge that Hashi had broken the law. How many lives had been ruined by the drugs he sold?

Hurrah! Is the light finally dawning? Well, no. Because she got a fellow hack to do some digging.


The full facts disturbed me. It emerged that Hashi was only 17, a minor, when he was arrested. For as long as he can remember, he has felt British and knows no other way of life. His right to appeal appears to have been bungled by the Home Office (no surprise to those who are familiar with its immigration service). In my view Hashi has not been deported. He has been transported to an alien, conflict-ridden land from which he cannot return.

If only that were true! But the UKBF hasn't exactly proven competent at this in the past...


Hashi was old enough to know that drug-dealing was wrong. But, at 17, did he understand that the consequences for a refugee would be so severe? I would be interested to hear readers’ views.

I wonder if the highest-scoring ones have changed your mind?

If you're wondering if they are all supportive of deportation, then the answer's no. But look at the scores the similarly-naive get:

So, have I become a 'Sunday Times' reader, or did this come to my attention because one of my fellow red-in-tooth-and-claw heartless 'right wingers' brought it to my attention? 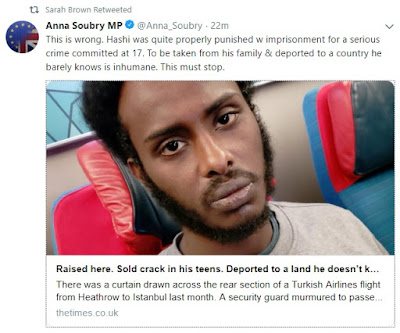 Modern 'Conservatism'. It's a mental disease. And it's spreading from the US.
Posted by JuliaM at 09:30

I don't think Soubry would have been so upset had she been informed that this scrote was a brexiteer.

The journalist should be sacked for helping a criminal escape justice

"I don't think Soubry would have been so upset had she been informed that this scrote was a brexiteer."

"The journalist should be sacked for helping a criminal escape justice"