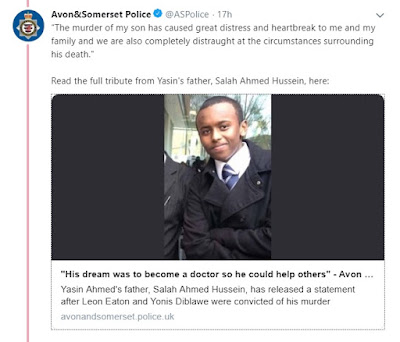 And here's a statement from the victim's father on the Avon & Somerset Police website:


“I am the father of Yasin Ahmed who was just 21-years-old when he was murdered.

“The murder of my son has caused great distress and heartbreak to me and my family and we are also completely distraught at the circumstances surrounding his death.

“My son, Yasin, was a very caring person and very considerate to others, especially towards the family and our community.

“His future was planned and he was accepted to study medicine at a very reputable university in China in September of this year. With his admission fee already paid, his dream was to become a doctor so he could help others.

“I just pray that Yasin’s character and reputation will be remembered fondly by the people who actually knew him as he was much loved by his family and by the whole community.”

If you're wondering about some of the wording used there, well....


Four members of a county lines gang have been convicted of murdering a member of a rival operation and seriously injuring two of his associates.

The men, aged between 23 and 37, were part of the Joey line that traffics Class A drugs from London to central Bristol.

They armed themselves with weapons including a “zombie knife” and stun guns before storming a flat in the city, which had been cuckooed by members of the rival Pablo line, on 25 June.

Little Yasin, who his father believes 'did so much for his community', was a drug dealer.


Speaking after the case, DCI Darren Hannant, said: “Yasin Ahmed did not deserve his fate but had put himself in a position where the risk of attack was an occupational hazard.

“While Yasin and his associates were clearly the victims of a brutal and targeted assault, they themselves were controlling a man twice their age in order to profit from their own drug-dealing enterprise.”

Who in the Avon & Somerset communication team authorised this? Who thought it was a good idea to let the family of this drug-dealing filth use their bandwidth to attempt to excuse his crime?

Drug dealers disposing of drug dealers. Having seen at first hand how drugs can ruin, not only an individual, but also whole families, what's not to like?
Penseivat

Never trust what they've told you.

We have, at least, spared ourselves the spectacle of a future Foreign Secretary pleading with the Chinese not to execute the twerp for drug dealing.

The level of policing in rural Somerset has been reduced because the priorities are drug dealing and associated crime in Bristol.
Why not withdraw plod and hope that the only people hurt in the resulting carnage are dealers (from London, like this child) and users.

*passes you the popcorn* As Jaded points out, No Humans Involved!

"...or that someone capable of a clean sweep of top grades feels the need to be a drug dealer. "

If you can avoid sampling the product yourself, it's probably more lucrative than becoming a GP. Just!

"Why not withdraw plod and hope that the only people hurt in the resulting carnage are dealers..."

So long as they stick to knives, so there's no chance of ricochets...