Did You Get In A Flap, Sussex Police..? 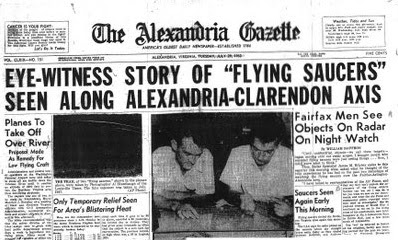 Ah, the 50s, when people were so naive and fearful and the authorities were hapless and reactive to the slightest....

Paul and Elaine Kirk-Gait returned to their home in Crawley, West Sussex this morning after spending more than 36 hours being questioned by detectives over the device that brought Gatwick Airport to a standstill.

It's beyond belief, isn't it?


Friends and family repeatedly insisted the pair were not the 'Eco-warriors' behind the attack and claimed officers under pressure to get results had 'hastily' arrested the wrong couple.

Within minutes of their identity being released, the media had managed to find and interview the people who provided them with an alibi - yet they were still held for hours afterwards!


As Sussex Police this afternoon confirmed they have found a 'damaged drone' close to Gatwick, Detective Chief Superintendent Jason Tingley said there was 'no available footage and they are relying on witness accounts.'

This comes despite witnesses providing MailOnline with video footage of drones hovering above the airspace last week.

Asked about speculation there was never a drone, he said: 'Of course, that's a possibility. We are working with human beings saying they have seen something.'


Det Ch Supt Tingley said the arrests made on Friday night were as a result of a tip-off from a member of the public.

And there's the most frightening thing of all - the modern police farce has become not a force for the keeping of the Queen's Peace, but a weapon that an aggrieved neighbour or cheated spouse can aim and point at the person they despise, knowing that they will not ask the most rudimentary questions first.


'I'm completely satisfied the arrests were lawful, bearing in mind the burden of proof and likely suspicion at the time of arrest,' he said.

That's all he cares about - not that they were justified or sensible or proportionate, merely that they were lawful. DCS Tingley, you see, is the very model of a modern police officer.


'Obviously we had to be sure prior to release, in terms of that investigation, they were no longer suspects. I won't apologise, but what I will say is we really do appreciate their co-operation and we have put a lot of effort and resources into supporting them when they were released from questioning.'

That's like an arsonist putting you up in a hotel after they've burned down your house! Does it not occur to this gold-braid moron that he wouldn't have had to do that if his men had done some real police work first..?
Posted by JuliaM at 09:30

There's an opportunity for an excellent sport, here. Abducting police officers & holding them incommunicado for a few days before turfing them out. Maybe keep them entertained, whilst they're in custody, by asking them irrelevant & annoying questions for endless hours.
Points are to be scored based on the rank of the captive with bonus for a matched pair of different sexes.
After all, we are assured, such behaviour is entirely lawful.

This sounds like a cover up on the part of the police.

Assuming the report of the drone was checked by those in the control tower (the airport wouldn't be closed without confirmation) the police are either covering up for their incompetence or some protected group that must not be named just as they are loth to do anything with the Muslim rape gangs.

We also now have members of the UN Church of Climatology being given protected status.

It's enough to make me feel sorry for the coppers who joined up to do something honourable like catching criminals rather than accuse the innocent of being paedophiles or ignore people raping groups of white females...

"I'm sure they were, considering that the police can, in effect, lawfully arrest anyone for anything deemed unlawful (except, of course, when they choose not to exercise that power in respect of the rapes of white underage girls by members of a protected class)."

"There's an opportunity for an excellent sport, here."

"This sounds like a cover up on the part of the police. "

You think they are capable of this? If it's run with their usual efficiency we'd already know who, what, where, why!

"It's enough to make me feel sorry for the coppers who joined up to do something honourable..."

I think those are the ones who've all now left. We are mostly stuck with the dross.

How hard do we think he would be apologizing if the arrestees had been of a different demographic?